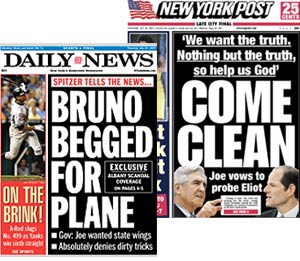 Senate Majority Joseph Bruno's and Governor Eliot Spitzer's epic Choppergate fight grows each and every day. Yesterday, Bruno demanded that investigations be opened to focus on Spitzer's administration and whether Spitzer staffers were engaged in trying to sabotage him. Bruno said, "A lot of people in authority think there was criminality in the executive branch... I want to know how much the governor knew ... This is not going to go away, not going to get swept under a rug."

However, Spitzer's office was quick to offer this statement: "Any new Senate hearings on this same issue would be a complete waste of state taxpayer dollars for purely partisan and political purposes. Moreover, the state Senate lacks the constitutional authority to conduct investigatory hearings into the internal operations of the governor's office." Assembly Leader Sheldon Silver told the Sun he didn't think there was a need for a hearing, "We heard from the top law enforcement officer in the state, Andrew Cuomo. A lot of misjudgments were made, but there was no criminality."

Spitzer spoke to the Daily News' editorial board yesterday and explained that Bruno's fondness for state aircraft was legend:

"[Bruno] said, 'You know one of the things that Gov. Pataki did was take away the copter from me.' I said, 'Joe, I'm not going to do that... I assume there are rules and regulations that determine when and how it is used. I am not going to say I am taking my toys. They are not my toys."

After he took office Jan. 1, Spitzer said, Bruno's requests for use of the aircraft became almost a punch line.

"A couple of people would just roll their eyes and say you know, '[Bruno's] using it again?' because there was a sense that there was ambiguity about whether he was using it for a government purpose," he said.

Spitzer continued to deny that he had any knowledge of his aides using the State Police to keep records of Bruno's travel and that he didn't realize his aides refused to answer the Attorney General's questions. In fact, in an chat with the Times Union's editorial board, Spitzer said he was "consumed, literally, 18 hours a day, negotiating congestion pricing and campaign finance reform."

Still, the fact that the Attorney General found that top Spitzer aides were working to discredit Bruno by releasing State Police information to the media has, in a way, burnished Bruno's image at the moment. In fact, the NY Times describes that Bruno was in great spirits, at Saratoga's horse racing opening day festivities, and that he "floated through the crowd like a pasha down the Nile." But at the end of the day, the only one smelling like a rose seems to be AG Andrew Cuomo (even a Republican strategist thinks so!).