Bruno Offers His Gut For Punching 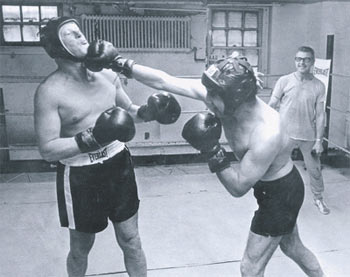 How did we miss this? Last week, City Hall News had an interview with State Senate Majority Leader Joseph Bruno and it included this photograph of Bruno boxing! Bruno is, of course, riding relatively high as Governor Spitzer's reputation is tainted in the wake of Troopergate, and Bruno can play the unwitting victim of Spitzer's aides dirty tricks plotting.

According to the City Hall News article, Bruno still works with a speed bag "five times a week," "still weighs within the light heavyweight 171-176 pound range," and "regularly encourages people to punch him in the wall of muscle that is his gut." We wonder if reporter Edward-Isaac Dovere got to punch him! Anyway, Bruno said that he thinks Governor Spitzer has no credibility and should leave office, not to mention the fact that Spitzer ruined his working relationship with Assembly Leader Sheldon Silver.

More Troopergate update:
The Daily News reports that the state GOP believes that former governor Pataki's bodyguard might have helped orchestrate the Troopergate plot. Spitzer's aides had tried to discredit Bruno by drawing attention to the State Senator's use of state vehicles to travel to NYC for political meetings while having very brief meetings about public issues and used the state police records to monitor Bruno's comings and goings on various state vehicles. (However, the Attorney General's report did not find any explicit wrongdoing by Bruno, but noted that the use of aircraft was very vaguely defined.)

Apparently Daniel Wiese, who had once led Pataki's security detail, and Spitzer worked together in the Manhattan DA's office. One State Senate official says that the acting superintendent of the state police is "a puppet" and that Wiese really ran the show. Wiese denied the accusations, telling the News, "I have always had the utmost respect for Senator Bruno."

Last week, the State Ethics Commission revised the rules for officials using state aircraft. Now state officials will have to reimburse the state if they use state aircraft for a non-public business. The AP's example: "If four hours of a six-hour trip are spent on political business, an official must pay for two-thirds of the aircraft use at rates equal to what a private charter company would charge."

And the Post continues to wonder if the ethics probe into Spitzer's aides conduct will get the job done: The State Ethics Commission only has three investigators.