Bruno Gets Nostalgic, Skelos Likely to Lead Next 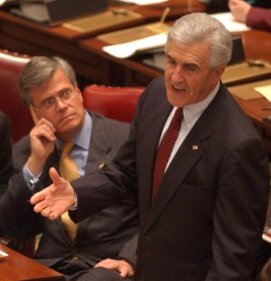 A day after his stunning decision to leave the State Senate after 32 years, Majority Leader Joseph Bruno held a sentimental press conference. Capitol Confidential and Daily Politics has highlights from his remarks, like “Life decisions are never easy. And I’ve made a life decision. My life decision is to step back, and step out" and answering "I have news for you, we're all terminal here" when asked if he is terminally ill.

Bruno was asked if the FBI investigation into his finances had anything to do with his decision to retire, and he emphatically denied it, "Let me just repeat that I have never been accused of anything, and don't ever expect to be accused of anything because I haven't done anything wrong."

He also paid tribute to the media, "The greatest experience I have had in my life has been dealing with all of you here in the media. Because you are something else. You are very very special, the work that you do really…Sometimes I hate you individually, love you sometimes when you make us look so great. I hate some of the pictures that you use some times. Like one of them this morning, that made me want to go to bed.”

The 79-year-old plans to step down from his role as majority leader immediately, and it appears that State Senator Dean G. Skelos, of Rockville Centre, Long Island, will be the new leader. Skelos was first elected to the Senate in 1984 and has been Deputy Majority Leader since 1995.

Photograph taken in 2003 of Bruno, standing, and Skelos, looking on, by Jim McKnight/AP

#dean skelos
#Joseph Bruno
#ny state gop
#republican
#retirement
#state senate
Do you know the scoop? Comment below or Send us a Tip