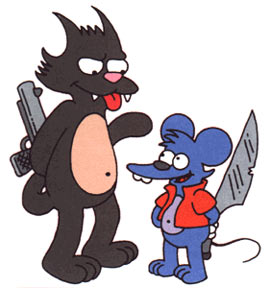 Why is it that things are hotter in Albany with the Legislative session over? The brouhaha between Senate Majority Leader Joseph Bruno and Governor Eliot Spitzer has, as the Sun put it, "reached a new low." Bruno had a press conference yesterday, saying Spitzer's alleged State Police surveillance on Bruno's activities was "espionage." From the Times Union:

"I've been in government 31 years and I've never experienced anything like this," said Bruno. "I was stunned to learn Governor Spitzer is using the fine men and women of the New York State Police to conduct surveillance on me," Bruno said. "This should send shivers up the spine of every New Yorker."

He also compared Spitzer to a "Third World dictator." The allegations that Spitzer was asking the State Police to keep records of Bruno's activities stems from yesterday's Post article that had quotes from Spitzer spokesman Darren Dopp saying that Spitzer was doing as much. But then Dopp called the Post story "grossly inaccurate and false," which then led to the Post detailing its exchanges with Dopp.

The state inspector general will now investigate Bruno's claims about Spitzer's spying, which joins these other investigations: The one into whether Bruno used state aircraft for non-state business (not to mention state police escorts) and the one into whether the Times Union extorted Bruno.

Baruch College political science professor Douglas Muzzio told the Daily News, "This is beyond politics. This is war. If you believe Bruno, Spitzer is Nixonian. The governor using the state police to spy on the leader of the opposition? That begins to approach the danger zone." A Daily News editorial, though, says: "Clear away the smoke being blown by Senate Majority Leader Joe Bruno over his blatant abuse of taxpayer-funded transportation, and it all boils down to this: He wants to act like a jerk, live like a king - and not be held accountable for any of it."

A Post editorial, though, begs, "A thorough investigation is in order; the sooner it is complete, the sooner Albany can return to its normal state of dysfunction. Indeed, it is with some irony that we note that Spitzer's pledge to 'change Albany' upon becoming governor seems to have been redeemed. It's more bizarre than ever."