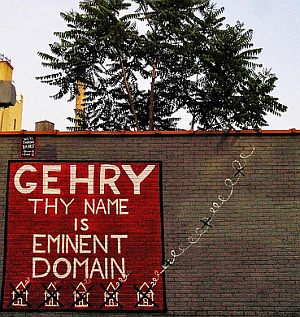 He may have been gloomy about the mega-project's prospects last month, but now Ratner has an opinion piece in today's Daily News, pledging to forge ahead with his eminent domain plans to take over Atlantic Ave. He writes:

Yes, it's true that construction hasn't happened as fast as we would have liked...[but] Finally, the delays have pushed us into a time when the economy has slowed, and both financing and tenant commitments are more challenging to obtain.

But contrary to rumors, large deals are still getting done, and in the past year alone we have closed on the two largest construction financings in our company's history, totaling over $1.3 billion. Atlantic Yards will be no different.

"Finally" is not quite what Ratner meant, as he goes on for another ten paragraphs about how he plans to build the Barclay's Center, Miss Brooklyn, and lots of residential housing. Given that Ratner has been trying to reassure investors that his plan to build up the intersection of Atlantic and Flatbush, opponents could see this as essentially an advertorial. Develop Don't Destroy Brooklyn points out Ratner offers no new information or evidence the project is in good shape.