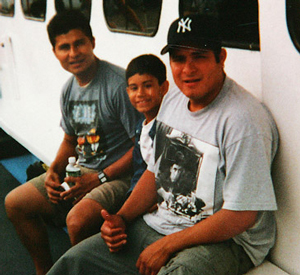 The two brothers who fell more than 40 stories from an Upper East Side apartment tower--only one surviving--had an inkling, if not outright concern, that the window washing scaffolding and platform they were using was not safe. A brother-in-law of Alcides and Edgar Moreno said that he talked with one of the brothers the morning of the incident, expressing their concern over the safety of the equipment, which apparently had a history of malfunctioning.

The family member, José Cumbicos, a brother-in-law, said that the brothers, Edgar and Alcides Moreno, had spoken of their concern about the scaffold in a telephone conversation with him Friday at 8:30 a.m., less than two hours before they went to work at the Solow Tower, at 265 East 66th Street, at Second Avenue.

Mr. Cumbicos, himself a window washer who had worked with Alcides Moreno for years, recalled that the brothers had told him of at least three problems with the Solow Tower scaffold this year, including one that had put it out of commission in the summer. He said he had urged them not to go to work on Friday.

After talking to their boss, however, who assured them that the equipment was safe, the brothers decided to go to work.

Younger brother Edgar Moreno was cut in half after he fell hundreds of feet and landed on a wooden fence. Alcides Moreno is clinging to life at a hospital on the Upper East Side, after his fall was apparently broken by the metal platform that gave way.