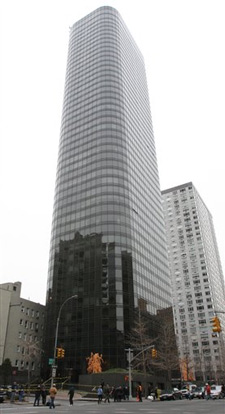 The two men who fell more than 40 stories, when the window washing rig they had just stepped onto collapsed, were brothers. Edgar and Alcides Moreno were Ecuadorians who had come to the U.S. and lived in Linden, NJ. They worked for City Wide Window Cleaning and were regular fixtures at the Solow Tower Apartments building on East 66th St.

The brothers were just starting work yesterday morning when they may have stepped on to the metal platform that was attached to a permanent piece of scaffolding installed on the building's roof. Neither men were wearing required safety harnesses. The New York Times raises the possibility that the men were not yet on the platform, but knocked from the roof when a cable broke free and whipsawed.

It's unclear what caused the metal platform to break free from the scaffolding, but when it did, 30-year-old Edgar Moreno instantly fell, plunging 43 stories. He landed on a fence below that cut his body in half. Older brother Alcides, who is 37, clung to the platform which held until slamming into the side of the building. Incredibly, the platform may have helped to break his fall when he landed in an alley between the tower and an adjacent building. Alcides Moreno is currently in critical condition at New York-Presbyterian Hospital Weill Cornell.

Witnesses described the whole event as fast and loud. Another window washer, who was working on the 5th floor at a building across the street at the time, said ""I saw the scaffolding falling very fast down. "In seconds, it went down." The New York Times writes that the man, Pedro Nunez, said the scaffolding came down so quickly he couldn't distinguish the men from the equipment. The impact of the collapse reportedly created a roar that echoed throughout the neighborhood. Phil Stellar lives on the 8th floor of the Solow Tower and was home at the time. "[It was] a big noise that sounded like a bomb had blown up," Stellar said. "It was like a roller-coaster sound times 10."

Edgar Moreno is survived by his wife and three children. Alcides Moreno, who lived with his brother in NJ, was saving money to bring his wife to the U.S. from Ecuador.