Brooklynites Speak Out Against New Bike Lane: 'What About The People Driving Their Cars?'

Another bike war is heating up in Brooklyn, this time a couple miles north of Prospect Park West: the Department of Transportation has put together a plan for street safety improvements on Clinton Avenue between Flushing and Gates Avenues, converting that stretch from a two-way street to a one-way northbound street and adding a two-way protected bike lane. But Clinton Hill residents, or at least those who showed up in droves at last night's Community Board 2's transportation committee meeting, aren't having any of it.

The meeting had been much-hyped in the past week, with anti-bike lane activists distributing flyers throughout the community and the Fort Greene Association emailing area residents and urging them to speak out against proposed street changes ("WITH TWO BIKE LANES AND A PEDESTRIAN ISLAND???!"). That campaign worked: some 300-plus people showed up last night, the majority of whom appeared to be against the proposed changes. There were also about 10 police officers in attendance, in case things got really rowdy—and though the meeting was frequently interrupted by shouting and booing from the crowd, members of which had to be told repeatedly to sit down and let the speaker finish, at no point did the cops have to intervene.

The DOT's reasoning for the street changes is this: there are very few north-south bike lanes in the area, and Clinton Avenue, as one of the wider north-south streets up for consideration for bike lanes, does not go through at Atlantic Avenue, which means it has comparatively less traffic as a result. Under the current proposal, a two-way protected bike lane would be installed along the east side of the street; Clinton Avenue would be converted into a one-way northbound street between Gates and Flushing; intersections would be enhanced with pedestrian islands to force drivers to control their turns there; and new crosswalks would potentially be added at Atlantic Avenue. The goal, DOT said, is to enhance safety for pedestrians, cyclists, and motorists alike.

"This isn't just about bike projects," insisted DOT's Ted Wright, who struggled to get through more than a few minutes of his prepared presentation without being interrupted by the audience. "This is about making it safer for you to walk down—" but down what, we'll never know for sure, as Wright was drowned out by boos from the audience. 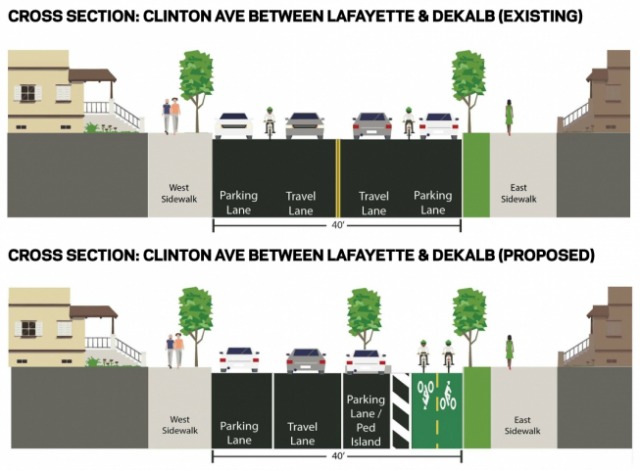 A segment of the plan for Clinton Avenue. (DOT)

Ahead of last night's presentation, the DOT conducted an online survey and received responses from over 1,000 people, 75% of whom live in CB2. Of those surveyed, 64% were in favor of the proposed changes, 29% were opposed, and 7% were unsure. But opponents to the plan accused the DOT of skewing the survey results in their favor, gearing it toward "bicycle people," and conducting it online to exclude responses from the elderly, who comprised the majority of the constituents gathered last night against the plan.

"The pedestrian survey was a joke," said Esther Blunt, who lives on Vanderbilt Avenue. "The pedestrian survey asked you, 'how often do you bike? Do you bike to work? Where do you work?' I mean, what? Is that a pedestrian survey? I'm 100% against this plan. It's for young people; it's discriminating against the elderly. Everybody can't ride a bike. I feel like settlers have come into our community and try to tell the natives what to do."

Many accused proponents of the plan of ageism and discrimination against the disabled, expressing concern that older or disabled people who live on Clinton Avenue would struggle to get to Access-A-Ride vans or ambulances if they have to walk through a two-way bike lane. Sandy Rayburn, who's lived in Clinton Hill for 27 years and described herself as an elder advocate, said that she objects to the plan on the basis of discrimination.

"The way this has been set up, it's in contravention of those elders that are disabled," she said, arguing that such people would have trouble getting from a vehicle to the curb past the bike lane. "This will be constructed in defiance of the ADA...This is in contravention of the Americans with Disabilities Act, and I think if need be we'll have to pursue it."

Rayburn's threat of legal action echoed the Prospect Park West bike lane battle, in which an embittered group of locals is still suing the city over a protected bike lane installed six years ago. In some regards, that plan was similar to the one presented last night: it, too, replaced a lane of traffic with a two-way protected bike lane. According to Sean Quinn, who's Senior Director at the DOT's Office of Bicycle and Pedestrian Programs, crashes resulting in injuries along the transformed stretch of Prospect Park West decreased by 63% after the two-way bike path was installed. Speeding, he said, went down from 74% to 28% when the street was converted from a two-way to a one-way street for motor vehicles, and where 46% of cyclists had been riding on the sidewalk prior to the conversion, now only 3% were. 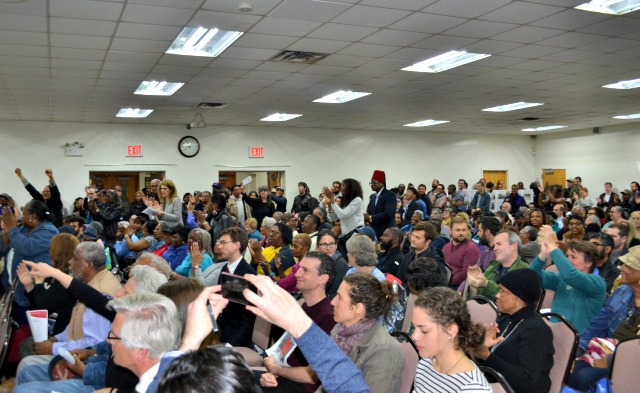 An impassioned bike lane opponent receives a round of applause, and some standing ovations, from the audience. (Miranda Katz / Gothamist)

At least 90 people signed up to speak during the public session at last night's meeting, but the board got through just 22, the majority of whom, like Rayburn and Blunt, opposed the plan. The meeting did, however, draw some supporters of the plan, such as Brandon Chamberlin, who described himself as one of the 60% of city residents living in a household without a car and said he's particularly concerned with pedestrian safety.

"A lot of people have said, 'Why can't there be a one-way [bike] lane on two streets, on [the] street?' But if you take away the protected lane, you take away all the pedestrian safety improvements," Chamberlin said. "You don't have the shortened crossing, you don't have the [pedestrian island], you can't have the curb things to slow down cars as they turn. You get absolutely none of it…If every single block could be a veto for every single project, no one could get any place. Traffic violence, it's a public health issue, and we have proven tools, proven data-based tools that we know will save lives, and the question is, do we let the experts implement them? Because there's been too many funerals."

A handful of CB2 transportation committee members also spoke in favor of the plan: Juliet Cullen-Chang, for example, implored the crowd to remember that "we're talking about the loss of parking spaces, but these are lives that they're talking about." Chris DeVito, also a member of the committee, asked those gathered to raise their hand if they have ever walked on Clinton Avenue, and then reminded them that "you're all potential beneficiaries of the safety improvements that this project will lead to. I understand that people sometimes feel unsafe in the presence of bikes, but the truth is, and the data bears this out in spades, you are much more likely to be injured seriously or killed by a car."

But this logic had trouble competing with impassioned arguments from other CB2 members, who were quick to inform the crowd early on in the meeting that they'd be voting against the plan in June (that vote, for what it's worth, is purely advisory, as community boards have no veto power). Ruth Saunders, who is a member of CB2 but does not sit on the transportation committee, wanted to know: what about the children?! 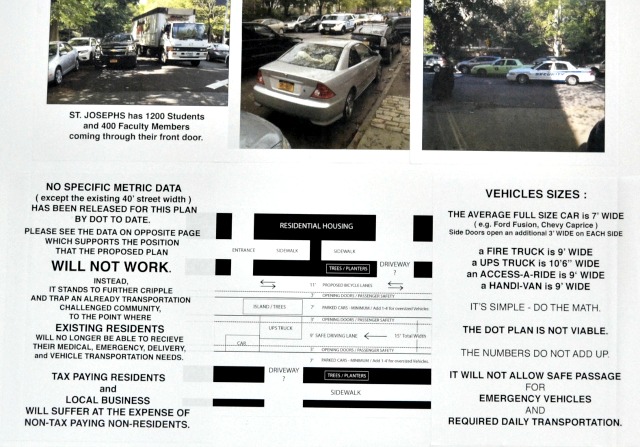 Last night's meeting was also attended by City Council Member Laurie Cumbo and Public Advocate Letitia James, both of whom expressed their opposition to the plan and encouraged DOT to consider coming up with a new plan for street safety and bike lanes in the area, this time taking into account input from all corners of the community before presenting it to the board.

"We should have been brought to the table collectively and together to discuss this project," Cumbo said. "I do believe that we do need a solution. I do believe that we can come up with a solution together. I believe that the process in terms of how this was brought forward has created such an adversarial environment around it that we simply can't move forward with the plan as it has been presented to us."

There will be a second meeting at the same location—54 Gates Avenue—at 6 p.m. tomorrow, to hear testimony from the 68 people who signed up but were not able to speak last night. When asked about next steps after last night's meeting, DOT representatives present said that it's all dependent on how that meeting goes.