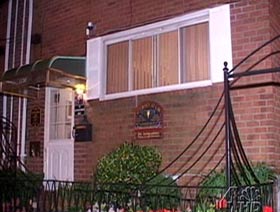 A 62-year-old woman was attacked in her Gerritsen Beach home when two masked men pushed their way in. WNBC 4 reports that the woman's husband ran downstairs to help fight off the attackers, who fled and left the scene in a black Jeep.

According to WABC 7, the woman had been letting her cats back inside the house around 10PM when the men approached her. One of the men may have been armed with a gun.

The couple resides on Gerritsen Avenue, which is in the 61st Precinct; robberies and burglaries are down on a month-to-month and year-to-year basis (PDF). The woman was treated for broken ribs and other injuries at Lutheran Medical Center.