After various human body parts have been found in different Long Island towns, Suffolk County police say that a woman has been charged with murder.

Leah Cuevas, 42, was apprehended by a U.S. Marshal yesterday. She is accused of killing Chinelle Latoya Thompson Browne, a woman who has been missing for weeks. Cuevas and Browne lived in the same Brownsville apartment building.

Some human remains were found in Bay Shore, near the Fire Island Ferry parking lot, earlier this month. A few days later, a severed arm was found in a Hempstead front yard, then the day after that, more body parts were found, also in Hempstead.

Last week, a head was found. It was suspected that the remains belonged to Browne, 27; a Post report said that a tattoo on one of the arms matched a tattoo Browne has.

NBC New York reports, "Sources told NBC 4 New York Wednesday night that that the suspect may have had a dispute with Browne before her death. Investigators are also looking to see if a second person played a role in disposing the victim's body and plan to question Cuevas' husband about the case." 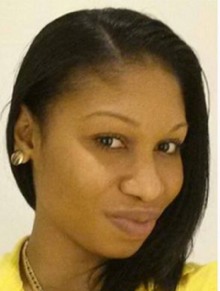 Another source said last week that investigators were focusing on at least one person of interest in the case who has had residences in Brooklyn and Long Island. That source also said that during the course of the investigation into Browne's disappearance, police had uncovered a questionable transaction involving the building where she lived.

An apparently fraudulent deed was filed that bore the signature of the original owner, who had been dead for about four months at the time of the filing, according to New York City records.

Apparently Cuevas was the landlord or Browne's roommate in the Sumpter Street apartment building.

Browne had left her husband and four children in Guyana to pursue work in New York. She was reported missing when she didn't show up for her job on July 8.