Now that New York City has two basketball teams, NBA Commissioner David Stern pulled a King Solomon and is splitting the 2015 NBA All-Star Game between the Barclays Center and Madison Square Garden. Stern proclaimed, "New York offers an extraordinary opportunity to host NBA All-Star events at two world-class venues." The announcement was going swimmingly until Stern messed up and called the Brooklyn Nets the "New York Nets" early in the press conference! (He apologized later, but the damage was done and will never be forgotten.)

The Barclays Center will host the skills competition on Saturday, February 14, 2015, while the All-Star Game will be played on Sunday, February 15, 2015, at Madison Square Garden. Mayor Bloomberg said, "New York City is the basketball capital of the world and the sport's biggest stage. We're lucky enough to have two world-class arenas, and the only thing better than having All-Star weekend at Madison Square Garden or the Barclays Center is having it at both of them."

Moguls were assembled—Bruce Ratner of Forest City Ratner, Brooklyn Nets minority owner who built the Barclays Center, as well as James Dolan of Madison Square Garden and Cablevision (King Knicks "Buffoon")—and they said they were happy with the outcome. Ratner said, "For public purposes, we have a wonderful rivalry. Privately, New York is used to rivalries."

Dolan had to respond a question about Public Advocate Bill de Blasio's letter demanding that the All-Star Game be held in Brooklyn only, and not at MSG because of Cablevision's dispute with union workers in Brooklyn. Dolan defended Madison Square Garden's labor practices, arguing, "I think that particular letter was more spurred on by the CWA in Brooklyn, saying that it had little to do with with Madison Square Garden." 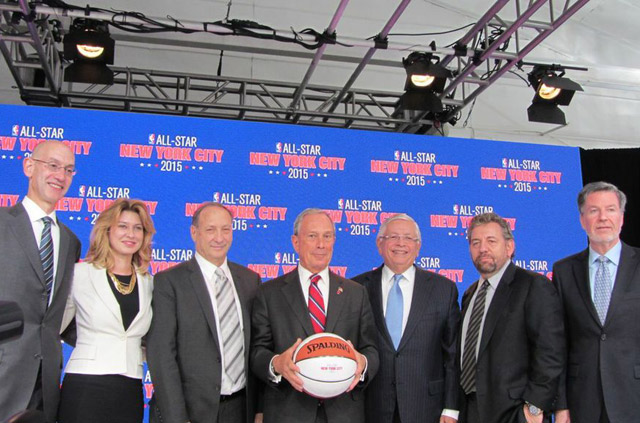 Bloomberg, some moguls and NBA folks (Jade A. Williams/Gothamist)

One hot question was about tickets and whether season ticket holders will get a shot at them: Future NBA Commissioner Adam Silver said, "This issue is, the Nets and the Knicks together have such large season ticket bases, there just aren’t physically enough tickets to satisfy everyone.." He said, "We’ll hold lotteries for tickets," but emphasized that there will be events all over the city. "That’s why we’re so focused on the festival notion, so that we ensure we find a way to accommodate all the fans who are interested in participating, in some way, over the course of the week."

Bloomberg offered his perspective, "My first concern is to make sure that I can go. I have season tickets for both of the teams, and I will be a private citizen [in 2015] so I really don’t have a lot to say about anything else." He said he'd be "honored to be there. Also, one of those days is my birthday. So, I certainly have to go."

Stern praised Bloomberg for ushering in the Barclays Center, "On your watch, this great new building went up and this transformation occurred and New York City sports is in terrific shape. We thank you for your oversight and for your encouragement."

The mayor responded, "Thank you, but let me point out, that in 12 years, not one of the major league teams in our city in any sport asked me to play in a real game. I’ve thrown out a baseball, that is true. But that was before the beginning of the first inning.”

Stern took the bait, "I’d like to invite you to toss up the ceremonial jump ball at both venues priors to your stepping down."

Reporting by Jade A. Williams