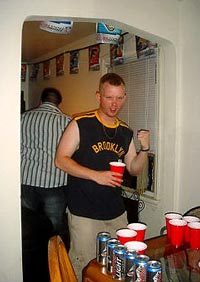 A family had been living in its Mill Basin, Brooklyn apartment for less than a week, when their 18-month-old toddler was struck by a bullet that passed through its ceiling from an upstairs apartment Thursday afternoon. Their upstairs neighbor is 24-year-old police officer, an Army veteran assigned to Manhattan's 1st Precinct, named Patrick Venetek.

Venetek rushed downstairs to explain what had happened. Per WCBS News, he claims he had been cleaning his gun when it fell of a table and discharged. Both Venetek and the father, Justin Porcellini, were present when Porcellini lifted the child to comfort him and noticed that he'd been shot in the arm.

The toddler was treated at Brookdale Hospital for a flesh wound and was released to his parents later that night. It does not seem likely that Venetek will be charged; Porcellini says he fully intends to sue the city. When crime scene investigators showed up at the officer's upstairs apartment to investigate his gun-cleaning story, they had to bring in their own lighting because his electricity had been turned off by Con Ed for non-payment.

WCBS also reports a somewhat bizarre coincidence regarding the address at 602 South Mayfair Drive in Brooklyn. In May 2005, dozens of cops converged on the very same house after a man was discovered dead in his apartment of natural causes, but surrounded by an arsenal of weapons, including a homemade bomb. Neighbors of the quiet residential neighborhood expressed surprise at the coincidence.

Photo of Patrick Venetek via the Daily News