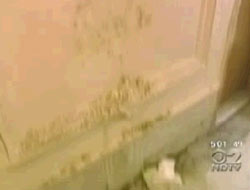 A long-running feud between a Bath Beach apartment building superintendent and a tenant turned violent yesterday morning. Tenant Alberto Sanchez allegedly wielded a knife at super Leoncio DeJesus, who then threw acid in Sanchez's face. The acid hit Sanchez's girlfriend, who was attempting to calm him down, as well.

Sanchez had allegedly jabbed the knife towards the super, and a witness said he overheard Sanchez saying, "I am gonna kill him" yesterday morning. Another said, "the super had a bottle with liquid in it, so he just tossed it to get away from him." The acid, "some kind of concentrated form of Drano liquid" according to WCBS 2 (the super had been unclogging a drain), was so powerful that Sanchez's and Millie DeJesus's (no relation to the super) clothing came off of them. Emergency workers treated them on the street and the couple was taken to Staten Island University Hospital with non-life-threatening injuries.

The dispute between tenant and super recently circled around a possible rent increase as well as Sanchez's threats to other residents. In September, the two men got into a fistfight that landed them in police custody. Now both men face charges.