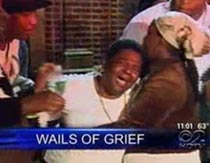 A woman returned to her Crown Heights home and made a devastating discovery: Her 16-year-old daughter was lying in a pool of blood, stabbed in the face and neck. Shannon Braithwaite was pronounced dead at the scene yesterday afternoon.

WCBS 2 reports the teen, who had the day off for the Rosh Hashanah holiday, was waiting for her mother to return home, "so they could cash her final paycheck from her summer job at the Brooklyn Children's Museum." But the girl's aunt said Marva Braithwaite "tried to open the door and the chain was on the door. As she pushed the door open, she saw [Shannon] lying on the floor."

According to the Daily News, Marva Braithwaite is blaming a female cousin who recently came to live with them, "The one day I left them alone, I came home to find my daughter stabbed up in a pool of blood."

The police, who found a bloody knife, are looking for the cousin. A neighbor told the Post she heard Shannon screaming, "Mommy! Mommy! Help me!" Shannon was also described as a church-going teen and a straight-A student. Her aunt said, "She never had a problem with anyone. That was my pride and joy. She's the daughter I never had."

#brooklyn
#crime
#Crown Heights
#stabbing
Do you know the scoop? Comment below or Send us a Tip