We've received several tips about flyers in Bed-Stuy and Crown Heights for "The Brooklyn Medical Marijuana Dispensary." A banner hung at the intersection of Nostrand Avenue and Herkimer Street notes that a medical marijuana dispensary called "Piazza Del Popolare" is "Coming Soon" to that lot, its combination of bad clip art and the imprimatur of the official NYC government logo lending it a whiff of legitimacy. As does the gradual progression of a medical marijuana bill in Albany. Don't buy it—it's just an extremely deep and pointless Trolling.

Let's assume New York has passed the medical marijuana law and the Health Department has created the necessary framework to license dispensaries (they haven't). Derek Bestreich, the real estate agent for Marcus & Millichap, says that only one of the four lots on that parcel is in contract, sold last year to a developer. "I don't know what this guy is thinking, but they're going to build an apartment building there."

"This guy," according to Piazza Del Popolare's website, is the manager, "Tim Jenkins."

Tim's website, a crude approximation of a Tim & Eric gag, pitches Piazza Del Popolare as "an innovative cultural redevelopment," combining a medical marijuana dispensary with a casino and a brothel. It's supposed to open on May 5, 2017.

On the site's main page there are multiple references to EBT, Medicare, and Medicaid, along with what appears to be a 10th grader's idea of social commentary:

Why this progressive trio of shops you ask?  Cultural anthropologists and leading scientists have found that the legalization of contemporaneously outlawed pleasures, such as marijuana and prostitution, decreases crime rates in their respective communities by up to 50%* (*Ingram DD, Franco SJ. NCHS.  National Center for Health, 2012.)!  It also improves the overall quality of life and causes extreme economic prosperity.  Examples include contemporary Denver, ancient Rome, and next - Brooklyn, NY.  Isn’t that amazing!

Dig deeper into the website and promises that Stephen Colbert will perform at the casino designed by Frank Gehry reveal a Tired Troll—the Bushwick Economic Development Corp. exists, but the Brooklyn Cultural Redevelopment Association does not.

Emails to the site's main address bounce back with this message: "Thank you for contacting Piazza Del Popolare! Due to high traffic volume we will reply to inquiries within 1-3 business day! Sincerely."

"Tim Jenkins" doesn't answer his email either, but he has a Facebook page that he created on May 5th of this year. Tim posted a link to his Piazza on Community Board 17's Facebook page. As curated as Tim's Facebook page is (he likes Nirvana and Nas and Pitbull, he's in the Cosplayer Nation group), Tim appears to have stolen his image from a designer named Matt.

There's even a "backlash." 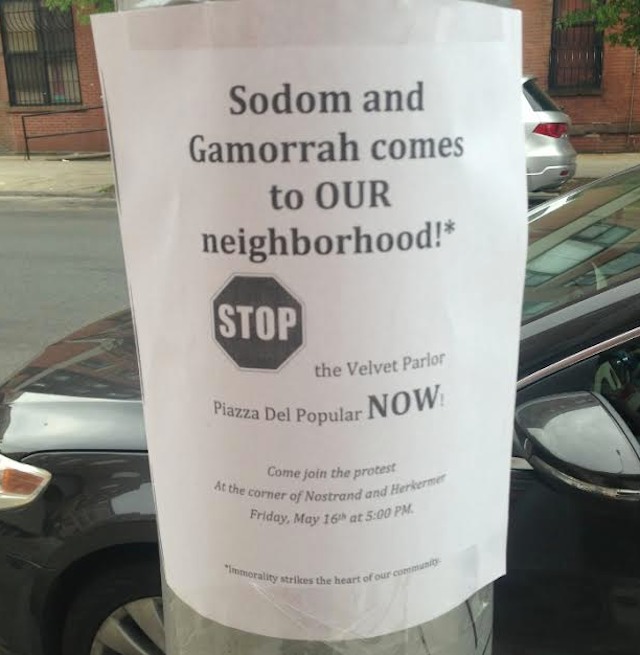 A tipster writes: "Some ladies came up to me and handed me this flier about a “parlor” opening in Crown Heights and that I need to pray for my sins? I keep seeing these protest signs all over my neighborhood and have no idea what is going on."

In other words, someone has papered the neighborhood with flyers and paid to hang up a banner and started a website and created a false Facebook page and a YouTube account, passed out flyers so they can make some vaguely racist joke about...gentrification? Libertarianism? Societal ills? Who cares. We've seen this kiddie pool before. Bed-Stuy is not getting a medical marijuana dispensary.

#bed stuy
#Bedford-Stuyvesant
#Crown Heights
#Deep Trolls
#medical marijuana
#trolls
#original
Do you know the scoop? Comment below or Send us a Tip