Seasoned subway riders know peak commuting hours are unpleasant underground, and much of your morning and evening commute will be spent mashed up underneath a stranger's armpit, breathing in another person's brie. For many people, this still beats sitting in bumper-to-bumper traffic (NEVER MOVE TO LOS ANGELES). But that doesn't mean we don't bitch endlessly about having to let two packed L trains pass by, and Brooklynites seem particularly concerned about overcrowding, considering Brooklyn's recent population boom. It appears, however, that the artisanal enthusiast's favorite borough is in fact the least plagued by subway crowding of them all. Everyone should move to Brooklyn! (Just kidding)(flee Brooklyn). 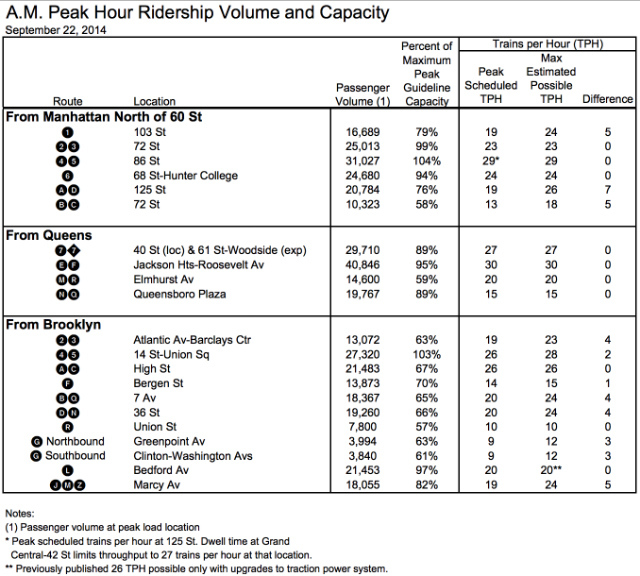 The good news is that the MTA's already working on projects that will relieve some train crowding. The first phase of the Second Avenue Subway, which is expected to debut at the end of 2016, will certainly open up some room on the 4, 5 and 6 trains, and both the L and the 7 trains have been and will be outfitted with smoother-running Communications Based Train Control [CBTC] systems. They've already boosted service on some lines, including the dreaded L. And New York YIMBY also suggests a number of ways the MTA and the city could shore up some room, like upgrading the Long Island Rail Road's infrastructure to accommodate more riders in Queens; adding more trains to the underused A/B/C/D trains in Upper Manhattan; and to create/encourage more office space in the Meatpacking District to alleviate crowding in Midtown East.

The bad news is, Governor Cuomo seems uninvested in providing the MTA with enough funds to make necessary repairs and complete new projects, so you may still need to familiarize yourself with that strange straphanger's armpit for some time. Hey, things could be worse.

#brooklyn
#crowding
#MTA
#subway
Do you know the scoop? Comment below or Send us a Tip