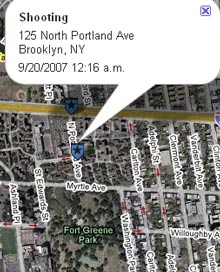 A clash between teenagers in Fort Green has left a 16-year-old dead and a 17-year-old injured. The shooting took place around 6PM outside the Whitman-Ingersoll Houses on North Portland Avenue. A 16-year-old was confronted by three other people and shot in the neck and torso.

He was pronounced dead at the hospital, while a 17-year-old, who was shot in the back and arm, is now in stable condition. It's unclear what caused the shooting. The NY Times reports that the 16-year-old had been seen with a gun and the Post adds that he had a "prior arrest record and was a suspect in a robbery earlier in the day."

Earlier this week, Mayor Bloomberg continued his gun-control campaign, supporting a Congressional bill that would block gun sales to people on terrorist watch lists. And a few weeks ago, it was revealed that the city's nascent gun offender registry is currently tracking 65 felons.