Hundreds of Brooklyn residents packed the auditorium of PS 133 in Boerum Hill on Thursday evening to voice their opposition to the City’s proposed expansion of the Brooklyn Detention Complex. The new jail proposal is part of the Mayor’s plan to close the violence-plagued Rikers Island and replace it with four smaller borough jails by 2027.

“We cannot achieve the types of reforms necessary on Rikers,” stated Dana Kaplan of the Mayor’s Office of Criminal Justice at the start of the hearing. The plan requires that the jail’s population, currently hovering just below 9,000, be decreased to 5,000. The borough jails will have a total capacity of 6,000.

The City’s plan for a new Brooklyn jail requires demolishing the existing Brooklyn Detention Complex and constructing a new building of nearly 1.5 million gross square feet, including ground floor retail space and underground parking, and would nearly double the number of beds from 815 to 1,510. City officials did not say how many stories the new jail would be. The maximum zoning height is 430 feet, which would make the new jail the borough’s 12th tallest building.

But Thursday night’s tone was markedly different than last week’s town hall in Chinatown, where residents drowned out the City’s speakers with their opposition. Though the majority in attendance opposed the proposed larger jail, they allowed city officials and Eric Fang of Perkins Eastman, the architecture firm designing the new jails, to present their slides with only some interruption.

Elected officials, from Assembly Member Jo Anne Simon to Senators Velmanette Montgomery and Brian Kavanagh, spoke against the mayor’s plan, decrying the lack of community engagement during the process and calling for the city to withdraw their scoping plans. Only City Councilmember Stephen Levin, who supported the plan for “more humane and efficient facilities,” was repeatedly drowned out by a chorus of “No” and boos.

While the city’s presentation addressed issues like parking (there would be plenty), it did not touch on concerns about the building’s size, safety inside the new jail, or how the city planned to shrink (and maintain) the current jail population.

Many of the residents and members of local business associations who voiced their opposition supported closing Rikers, but were outraged by the city’s lack of engagement with them before designing and unveiling the new jail. And they questioned the need for such a large and towering structure.

“It doesn’t have to be that dense,” said Peter Bray, the executive director of the Brooklyn Heights Association as he handed out copies of a rendering of the proposed jail’s size against the surrounding buildings. Residents later held these renderings aloft during Fang’s presentation of the proposed new building. 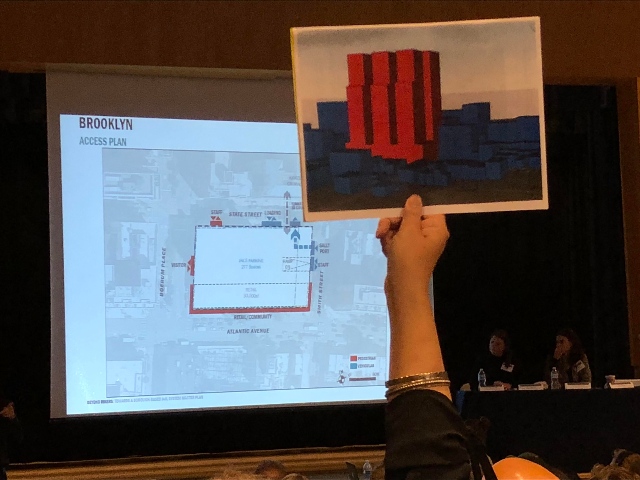 A person objecting to a new Boerum Hill jail building holds up an unofficial rendering made by opponents of the city's proposal. (Victoria Law / Gothamist)

“The problems that exist on Rikers exist in the borough jails,” testified Mariam Fishman, who lives on a neighboring street. She worries that the violence and abuse that have long plagued the island-jail complex will simply “spread to all of the other facilities.”

Kei Williams agrees. Williams, a Brooklyn resident, former organizer with Black Lives Matter and member of the #NoNewJails campaign, noted that the jail has seen a dramatic spike in slashings over the past three years. “How can the city explain to Brooklynites like myself how expanding this facility and developing three additional ones would not result in more dangerous situations like this? What is the guarantee that we will not end up with four new jails that are simply new Rikers?” Williams asked.

Bryan Welton, who lives in Flatbush and is also a member of #NoNewJails, agrees. During his brief stint at the Brooklyn jail, he said that officers repeatedly denied requests for water. “That was not a design problem,” he pointed out. “That was the guards exercising their power.” Building borough jails does not eliminate these capricious abuses of power, Welton said. Instead, it simply spreads the problems to other sites.

Devante Tate is an organizer with VOCAL-NY and a resident of East New York, where police routinely stop and harass young African-American men. He questioned how the city planned to reduce the numbers of people held in the jails, a key element for closing Rikers. “I have yet to see a plan to cut down the numbers,” Tate said. “There’s no plan with the NYPD. That’s the first point of contact. There’s no plan with the district attorney’s office.” Without plans in place for fewer arrests and fewer prosecutions, he said, “none of this will work.”

Seems like even people who support building these new jails don’t think the DOC should run them. One woman who just spoke said Mayor de Blasio needs to clean up the DOC before even thinking about building a new jail because of the culture of violence so prevalent amongst COs.

At 9 p.m., having patiently waited through scores of testimonies, Akeem Browder took the mic. He introduced himself as the brother of Kalief Browder who, he reminded the half-filled auditorium, spent three years on Rikers awaiting trial for allegedly stealing a backpack. Bail had been set at $3,000, an amount that their family could not afford. His incarceration was marked by nearly two years in solitary confinement as well as violence at the hands of both staff and other incarcerated men. He later died by suicide.

The public comment period will be open until Monday, October 15th. The City hopes to certify their plans by the end of 2018, so that the Uniform Land Use Review Procedure can begin.

Corrections: This story initially stated that the meeting's end time was 8 p.m. when in fact, the meeting had no scheduled end. It also stated that ULURP would begin in mid-2019, but the process technically begins with certification of the plans.

#brooklyn detention complex
#close rikers
#new jails
#Rikers Island
#original
Do you know the scoop? Comment below or Send us a Tip