After Indian commandoes stormed a Chabad-Jewish Center in Mumbai, where some of the workers had been taken hostage, the NY Times reports, "In the end, six of the hostages were killed, including the Brooklyn couple who operated the center."

Israeli defense minister Ehud Barack said on Israeli television, "The house was completely ruined from within, mainly from the explosions set off by the Indians. They found five bodies - two women and three men. Some of the bodies were tied up. To judge by the accompanying signs, some of the people were killed a good number of hours previously." 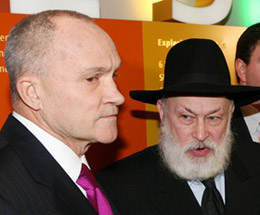 Rabbi Gavriel Holtzberg, 29, who grew up in Brooklyn, and his wife Rivka, 28, were among the dead. Their almost 2-year-old toddler son Moshe survived, after his nanny spirited him out. Rabbi Yehuda Krinsky of the Chabad Lubavitcher organization (pictured, left, with Police Commissioner Ray Kelly) said of the boy, "Today he became an orphan, without a dad and mom who lovingly embrace him," and also praised his Indian nanny, "Moshe was heroically rescued from that hell by his nanny."

Mayor Bloomberg said, "We have lost two New Yorkers. This is a tragic loss for the Lubavitch community, and for our entire City." Another rabbi told the Daily News that Rabbi Holtzberg "was the nicest gentleman you can imagine. Never saw him without a smile." His family says that he and his wife will be buried in Israel.

Right now, the death toll in the Mumbai terror attacks is at 183 people; there has been some criticism of the Indian response.