A new report on the Brooklyn Queens Connector or BQX—the streetcar that Mayor Bill de Blasio is apparently still determined to build—scales back the route by five miles, cutting out Sunset Park entirely, for a total of 11 miles of track. Despite the shortened proposed route, costs have crept up to $2.73 billion, from early estimates of $2.5 billion. And construction is not expected to begin until 2024.

At an unrelated news conference Thursday, de Blasio said that with 400,000 people living near the proposed route, it would still make this the biggest light rail project in the history of the U.S.

"It's the shape of things to come," de Blasio told reporters. "We need more mass transit and the center of gravity is moving to Brooklyn and Queens."

Cutting out Sunset Park would shave $500 million from the cost of the project, plus, as the report notes, the R train would still be faster. But some BQX critics have noted that the BQX route generally hews close to the G line.

Here's a route map. The highlighted black line I added is the G train. The new BQX route, as @JCColtin pointed out, is awfully close to the G train. pic.twitter.com/cOvaaUKZGf

The BQX is expected to cost riders $2.75, the price of a single MetroCard swipe, and would include a free transfer to a bus or subway. It would now run from Red Hook to Astoria, stopping every half-mile, which is roughly twice as long as the distance between stops as a bus route. Planners expect 50,000 daily weekday riders during the first year, according to the feasibility study.

If de Blasio's dream ever comes to fruition, it will be long after he leaves office and will rely on a mix of unsecured funding. Construction is estimated to take five years, wrapping up in 2029.

“To do it, we would need the combination of the revenue that it would generate and federal funding and that’s the only way, realistically we’ll get something done on this level,” de Blasio said.

When the project was announced in 2016, de Blasio assured it would pay for itself, with the city selling bonds to finance the construction and then paying them off with the increased property taxes that would come from development along the rail line. But that theoretical tax revenue—which critics said was wildly inflated and optimistic—is being allocated for other purposes, like affordable housing expenditures, the NY Times reports, creating a $1 billion funding gap. The latest funding plan looks hopefully to Washington to cover the difference.

There is currently no federal commitment to this project, which still has only 5 percent of its design completed. The city is now counting on $1 billion in federal funding to get BQX up and running.

“We think now that the fig leaf of ‘pays for itself’ has come off, the city should cancel the project,” Jon Orcutt with Transit Center wrote in a statement. “Every dime of federal, city or other transit money New York can get its hands on should go to Byford’s plan to fix the subways and buses.”

Anyway, here is the route as currently imagined: 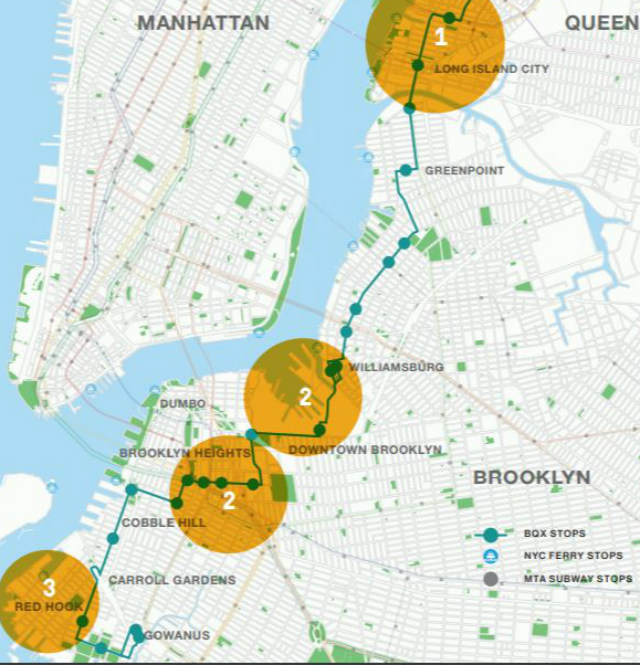 #bqx
#brooklyn
#mass transit
#monorail
#queens
#streetcar
#original
Do you know the scoop? Comment below or Send us a Tip