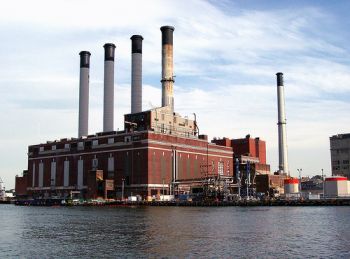 Earlier there was news of a luxury condo leveling a church and digging up graves, now word is in that the South Williamsburg power plant on Kent Avenue will meet the same fate. The Brooklyn Paper reports that Con Edison has finally admitted its plan to demolish the defunct power plant and neighborhood landmark.

Neighbors of the abandoned Kent Avenue power plant knew something was up back in March, when workers started tearing holes into the 102-year-old red brick building, which has been inactive since the late 1990s.

Up until now, Con Ed has stated that they've just been “cleaning up the site," and while they still maintain they have no definite plans for the waterfront property -- no one in the real estate business is buying that.

Meanwhile, the proposed Trans Gas power plant on the North Brooklyn waterfront, which has been met with local opposition, just started an appeal; the Bloomberg administration’s goal is currently "to build Bushwick Inlet Park between North Eighth and North 14th streets. But the city still does not control the Transgas site."