Well over 1,000 newly-minted Brooklyn Nets fans streamed into Brooklyn Borough Hall yesterday for a pep rally in honor of the team's All-Star "Brooklyn Backcourt," Deron Williams and Joe Johnson. Newest Net Johnson got the ball rolling on the long-awaited inter-city basketball rivalry by declaring the Nets the best team in the city. But of course, Brooklyn BP Marty Markowitz got in the best insult: “For nearly 40 years, the Manhattan Knicks have shown that they can’t bring the championship home to New York City!” he told the crowd. “So it’s going to take the Brooklyn Nets to get the job done!” Throw in a stripper pole and this would have been a classic Markowitz appearance.

Markowitz also joked that any Brooklyn resident who remains a fan of the “Manhattan” Knicks would be guilty of “treason,” which really does fit in with his revolutionary war hero persona. Although no one could possibly be more hyperbolic than good old Marty, Nets GM Billy King did declare: "This is a great day, because it's a day when we put together the best backcourt in the NBA." It was a sentiment the Lakers—who now have former MVP's Kobe Bryant and Steve Nash sharing a backcourt—might thoroughly disagree with. 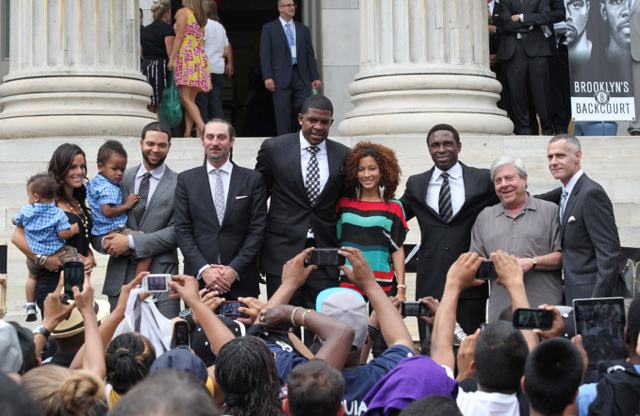 Coach Avery Johnson talked to WFAN about the improvements to the team, and their excitement over being able to retain Williams after two terrible season in New Jersey: "We know it's been two years of playing not so great basketball, mixed with injuries and transitioning over to Brooklyn, but we feel like now is our time...The trade for Joe Johnson I thought really solidified our vision. Everything that we told Deron, we feel that we've proven in terms of our commitment to winning and our commitment to spending money."

And despite pulling out of the Dwight Howard sweepstakes (for now—there's always the next trade deadline, and the 2013 offseason to look forward to!), the team isn't quite done spending yet—they still are planning to re-sign Kris Humphries, and as Johnson put it, "We've come very far but we still have some moves to make." For long-suffering Nets fans, they're just happy they have a watchable team again: “A great team, a great sport and a great arena," 47-year-old Tommy Bayiokos told the Post. "The sad days of the New Jersey Nets are finally over.”