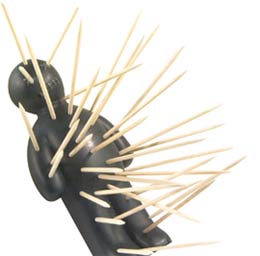 Police say a man confessed to the brutal killing of his girlfriend's 61-year-old mother on Tuesday. And Newsday says that among Joseph Cazeau's "stunning" admissions was that he was having an affair with his victim.

Cazeau and 42-year-old Mary Luzincourt had been together for 12 years, had three children, and were living on St. John's Place in Crown Heights. The couple had been having so many problems that Tuesday afternoon Luzincourt says she was seeking an order of protection against Cazeau. That night, he bludgeoned Luzincourt's mother Marie Tertel five times with a pipe, after Tertel "threatened to use "voodoo dust" on him."

He reportedly confessed to Luzincourt when she wanted to put one of their children to bed. From Newsday:

"He can't come in," the suspect told his girlfriend, one source quoted him as saying. "I just killed someone. I killed your mother."

The source said Cazeau picked up a phone dialed 911 and told the dispatcher, "I did a bad thing  send the cops here."

Two weeks ago, Cazeau apparently also told Luzincourt of his affair with her mother; her mother denied the claim but Luzincourt still wanted Cazeau out of the house. The police had been called to their home to check in on a domestic dispute last month, but no charges were filed.

The victim worked as a cook at a Haitian restaurant and had been looking for a new place to live, according to the Daily News. Her son Marc Tertel said, "[Cazeau] killed my mother. He is a terrible man -- a very violent man.