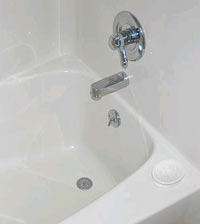 The 18-year-old mother who left her 11-month-old daughter in a bathtub on Tuesday was arrested and charged with reckless endangerment and acting in a manner injurious to a child yesterday. Jovanna Shiriver had left little Smiele Ordonez in a full tub, leaving the baby's 2-year-old aunt in charge. Shiriver went to cook, and when she returned, her daughter was underwater.

The NY Times spoke to a neighbor who performed CPR on the baby. Earl Brown said, "I’d never performed C.P.R. on a baby before. I had to do it as softly as I could because I didn’t want to hurt the baby.” He added that he didn't realize the baby had been unsupervised - when Shiriver brought the baby, she said she had been giving her a bath. "I thought maybe it was a freak accident. Maybe the baby slipped under the water for a minute.” The CPR managed to revive Semile, who was taken to Schneider Children's Hospital in Long Island.

A neighbor told the AP, "[Shiriver] loved the kids, and she took care of her daughter. Accidents can happen to anyone." And the baby's father, Jorge Ordonez, was reportedly turned away from the hospital, where Smiele is currently in critical condition; according to the Post, a guard told him, "It's the Fourth of July."

#baby
#children
#hospital
#kids
#long island
#News: NYC
#ny times
#The NY
#the ny times
Do you know the scoop? Comment below or Send us a Tip