Yesterday, the husband of the 27-year-old mother of two who was gunned down on a suburban NJ street was arrested for her murder. Kashif Parvaiz, 26-year-old Brooklyn native, and his mistress Antoinette Stephen, 26, were charged with murder in the first degree for killing Nazish Noorani as well as conspiracy to commit murder and unlawful possession of a weapon.

Morris County Prosecutor Robert Bianchi said, "Within hours of the crime, it was obvious to investigators that this was sadly the alleged handy work of the victim's husband who allegedly did the unthinkable and plotted to murder his wife, after a religious celebration. Within hours the husband was arrested and we pursued the co-conspirator who allegedly assisted him with an investigation that spanned three states, eventually leading to the alleged co-conspirator’s arrest in Boston, Massachusetts late last evening." Noorani's cousin Danish Iqbal said yesterday, "We just want to say thank you to authorities for all their work on the case." 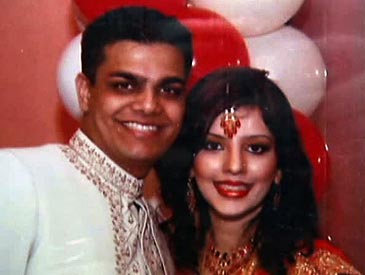 Kashif Pervaiz, who was wounded, and Nazish Noorani, who was fatally shot

Noorani, Parvaiz and their three-year-old son had been walking from her sister's house in Boonton to her parents' house a few blocks away. Noorani was shot in the heat while Parvaiz was hit multiple times, but survived. Their child was unharmed, but reportedly covered in blood (their five-year-old son had been her parents' house). From the hospital, Parvaiz initially told police officers that a group of men, black and white, fired at them while using racial epithets and calling them "terrorists," but later said that the assailants were black. The Post reported:

Finally, [Capt. Jeff] Paul [of the Morris County Prosecutor's Office] wrenched a dramatic hospital bedside confession from Parvaiz, who admitted he was uncontrollably angry at his wife because she made negative comments about his family, court papers said.

He allegedly whined that he didn't want to be the person responsible for looking at his kids and telling them he was the one who took away their mom.

Prosecutors also charged him with hindering apprehension or prosecution and endangering the welfare of a child.

Parvaiz had been exchanging text messages with Stephen, a Massaschusetts resident, to plan the murder. She messaged him, "You hang in there. Freedom is just around ur corner," while he sent her texts like "I can meet u I told Naz I ate too much and im going out for a walk where are u." Stephen texted him how she was planning to see what police response might be, "I know, I saw. I'm driving to the nearest precinct. To judge their driving distance," and on the day of the shooting, she sent him, "Call me when u can. Delete all msgs from phone. I won't message from here on."

Noorani, who immigrated from Pakistan, met Parvaiz in Brooklyn six years ago. Her family says it was "love at first sight" for her, but they were suspicious of Parvaiz and tried to vet him. A cousin told the Daily News that Parvaiz told them he went to NYU but he couldn't show them an ID: "'We knew he was full of it,' the cousin said. The next day, the cousin said, Parvaiz emailed them a photograph of his purported NYU identification card. It was a fake."

While the cousin tried to warn Noorani, Noorani allegedly said, "I'm going to marry him come hell or high water" and married him. However, more recently, she texted a relative, "If you should find me dead someday... It was Kashi. He wants to kill me."

Parvaiz, who claimed to have received a graduate degree from Columbia, moved to Boston, saying he was attending Harvard for graduate school (neither school has a record of him). Parvaiz had been arrested six months ago for allegedly assaulting another girlfriend, who never pressed charges so the case was dropped.

Stephen was arrested in Massachuetts and is being held on $5 million. Authorities are extraditing her to NJ. Stephen's neighbors say they recognized Parvaiz (he was "unfriendly") and said he had stayed at her home multiple times, but Bianchi refused to comment on whether the pair had a physical relationship.

Bianchi did say about the initial reports that the shooting was a hate crime, "Initially, upon learning from the defendant/husband that this may have been a bias crime, we were particularly concerned, as we are dedicated to the principal that we are all entitled to live in this country free from the social ills of prejudice, bias and bigotry. We want our Islamic community, our brothers and sisters, to be assured that we would never tolerate any bias crime and would stop at nothing to ensure that this community was protected from any form of bias or prejudice. After considerable investigative analysis law enforcement quickly concluded that this was not a bias crime." A Noorani family friend told the Post, "[Parvaiz] should be shot. It's the holy month of Ramadan. He's not a man. He's an animal."

Early Addition: Someone voted for 'Your Mom' in the tight NJ-7 race

Because Republican Tom Kean Jr. defeated "Your Mom" by 158k votes, here are your early links: They're chanting "I wanna see a movie!" in Beijing, fake purse sales are booming on Canal Street, menopause is chic now, and more.

By
Gwynne Hogan
Struggling Ida victims were entitled to 18 months of rental aid. Fewer than 300 in NY and NJ got it.
By
Karen Yi
Facing surge in homeless students, teachers in Queens open a store offering free food and items
By
Gwynne Hogan
NYPD officer fired 3 years after alleged beating of jailed homeless woman
By
Jake Offenhartz
Get the news New Yorkers need in your inbox