Hours after mourners gathered to remember a Queens imam and his assistant who were gunned down in broad daylight on an Ozone Park street corner over the weekend, the NYPD announced that they had arrested the alleged shooter. Oscar Morel, 35, has been charged with two counts of murder and two counts of criminal possession of a weapon. His brother was shocked, telling the Daily News, "This is nothing like him. My brother is a decent person."

Imam Maulama Akonjee, 55, and his assistant Thara Uddin, 64, were walking from the Al-Furqan Jame Masjid mosque on Saturday afternoon when a man approached them from behind and shot them both in the head. The suspect then got into a car, which the police determined was a Chevy Trailblazer.

Shortly after the shooting, a Trailblazer driver struck a cyclist while making a U-turn in Brooklyn. The cyclist took the license plate number down and reported it to police. According to the Daily Beast, "The report soon came to the attention of an old school first grade detective who was going through all summonses and traffic incidents in the immediate aftermath of the murder in broad daylight of an imam and his assistant... The detective now saw that the bicycle incident had occurred 14 blocks away, and at the time it would have taken to drive that distance."

The police investigated the license plate number, tracked the Trailblazer to Miller Avenue in Brooklyn and began surveillance of the vehicle. When Morel got into the car and started to drive away, officers advanced, and Morel drove into an unmarked law enforcement vehicle. NYPD Chief of Detectives Robert Boyce said Morel "rammed the detectives’ car several times in an effort to get away. He was placed under arrest without any further incident."

A police source said the driver in the U-turn video was a "psycho." Police reportedly found the revolver used in the shooting "in the wall" of Morel's basement apartment.

Muslims have been demanding that police charge Morel with a hate crime. The NYPD says they are continuing to investigate that angle. The suspect's brother, Alvin Morel, said, "The only time we felt, everybody in New York felt, a hatred, was during 9/11. Other than that, we never felt a hatred with nobody.”

He added, "I spoke to him just last [Sunday] evening, and he was all nonchalant, like nothing has happened."

There's been speculation the deaths of Akonjee and Uddin were related to Hispanic-Muslim tensions, a police source tells the Post, "Preliminarily, [police] don’t have a motive for the shooting. They don’t know what it’s about... They know it was a hit; the guy came up from behind and shot them. But they don't have a motive." 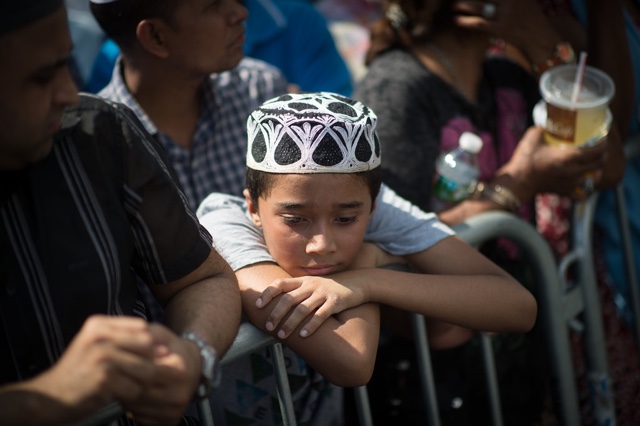 Still, one mourner said to WCBS 2, “Two people just got murdered and NYPD saying this might not be a hate crime. I would like to ask NYPD, what is it then? Come on. Somebody comes from behind and shoot you for no reason - imam and his assistant? Come on, this is common sense.”

As Muslims in New York City worry about their safety, some New Yorkers have been offering them escorts to and from mosques. A GoFundMe campaign has been started for Akonjee's and Uddin's families as well.

At the funeral, Mayor Bill de Blasio promised, "We‘re not going to listen to those voices who try to divide us. We will stand up to them each and every time. We will make sure that whoever did this is brought to justice, I can guarantee you that."