A Brooklyn man is among the 36 victims publicly identified so far in the mass shooting at a gay nightclub just outside Orlando, Florida early Sunday morning that left 49 people dead (not counting the perpetrator) and more than 50 injured—the deadliest mass shooting in American history. Enrique L. Rios, Jr., 25, was on vacation in Orlando this weekend. He worked as a coordinator for a Brooklyn elderly home-care provider, according to his Facebook page, and studied social work at St. Francis College.

Rios's mother has launched a GoFundMe page to raise money to return her son's body to Brooklyn for a funeral. "I come as a humble, hurt, devastated mother," she wrote. "My family is torn apart and all I would like is to have my son with me so he can the funeral he deserves."

"My son was a good kid. He was just having a great time on his vacation, until this deranged man came in and shot the place up," she added.

The city of Orlando has released a running list of victims whose families have been notified, which will be updated periodically. A local helpline, 407-246-4357, has been set up for families still searching for their loved ones. According to the NY Times, 48 of the 49 victims had been ID'd as of Monday morning.

ABC reports that bodies were removed methodically on stretchers throughout the day Sunday, four at a time, and placed in white vans. All of the deceased had been taken to the county medical examiner's office by 11:00 p.m., but doctors at local hospitals stressed that the majority of the 53 injured victims are in critical condition. The death toll is expected to increase.

The shooter, who was killed by responding police after a lengthy standoff, has been identified as 29-year-old Omar Mateen, a U.S. citizen who was living in Port St. Lucie, Florida when he carried out the deadly attack.

At a press conference early this morning, Orlando Police chief John Mina told reporters that Mateen "didn't ask for much" during hostage negotiations. "We were doing most of the asking," he added. Mina couldn't confirm whether any hostages were struck by police. 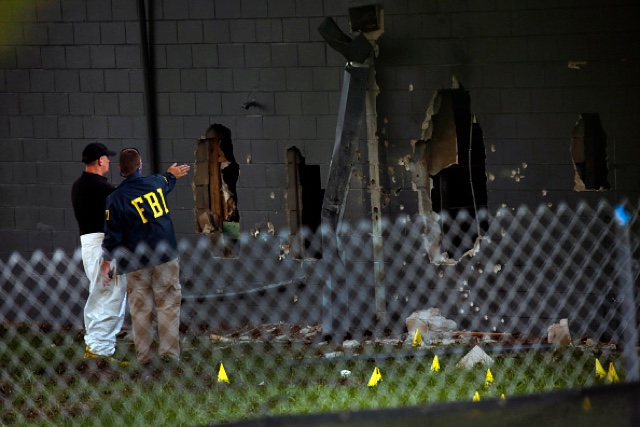 The back side of Pulse nightclub (Getty).

The Orlando Sentinel provided the latest update on the sequence of events as they are understood:

...an officer working security at the club exchanged gunfire with Mateen near one of the entrances. The officer called for backup at 2:02 a.m. as Mateen ran inside and opened fire into the crowd on the dance floor.

Mina said many people were then able to escape, as Mateen retreated to a bathroom.

He held about a handful of people hostage with him, while about 15 others hid in a nearby bathroom.

That's when Mateen called 911 and pledged alliance to the Islamic state, Mina said.

Crisis negotiators tried to work with him, Mina said, and during that time things "stabilized." No shots were fired, but there was talk about explosives and a possible bomb vest.

Mina said he then -- three hours after the first gunshot -- gave the order for SWAT crews to use a battering ram to get inside.

They broke a 3-foot hole into one of the bathroom walls and pulled several people out.

Mateen had two separate licenses to carry firearms in Florida, and worked for private security company G4S. He was armed with an AR-15-style assault rifle and a handgun when he entered the nightclub Pulse around 2 a.m. Sunday morning. New footage acquired by CBS seems to show Mateen firing 24 rounds in 9 seconds.

Mateen was born in New York, to Afghan parents. Although ISIS has since taken credit for the attack, stating that it was "carried out by an Islamic State fighter," it is as yet unclear whether Mateen had any communication with the extremists leading up to Sunday's massacre. According to his immediate family and ex-wife, Mateen was extremely homophobic and an abusive partner.

It has also been confirmed that Mateen was investigated by the FBI in 2013 and 2014—both cases were closed. His father, Seddique Mir Mateen, posted a video on Facebook early this morning, speaking in Dari. The NY Times translated:

“I don’t know what caused this. I did not know and did not understand that he has anger in his heart.”

"My son, Omar Mateen, was a very good boy, an educated boy, who had a child and a wife, very respectful of his parents."

Addressing reporters on Monday, Florida Governor Rick Scott confirmed that he has asked President Obama to declare a federal emergency on his state's behalf, so that "the full resources of the federal government can be made available for all those impacted by this horrific massacre.” Such a declaration typically prompts an initial $5 million relief grant.

In New York, the Post reports that the NYPD has announced plans to ramp up security at gay nightclubs city-wide.

“We are working closely with the LGBT community to figure out exactly where we need to put our assets,” Chief of Department James O’Neill told reporters Monday. The NYPD will also have ample security at tonight's vigil at the Stonewall Inn.