Brooklyn Jail Officials Accused Of Lying About Heat Outages: 'What The Warden Said Was False'

The freezing conditions at the Metropolitan Detention Center that sparked national outcry and intense protests this weekend were part of a string of heat outages that began at the Brooklyn federal jail weeks earlier, according to jail staff and detainees who testified during a federal hearing on Tuesday. But instead of intervening to protect those incarcerated at the jail, the warden at MDC, Herman Quay, lied about the extent of the crisis, while downplaying long-standing issues at the facility, attorneys said.

"I have personal knowledge that what the warden said was false," Deirdre von Dornum, attorney-in-charge of the Federal Defenders of New York, told Judge Analisa Torres at the hours-long hearing in Lower Manhattan.

As Quay insisted that detainees were never deprived of heat, medical access or hot meals, von Dornum—who was permitted by a judge to tour the facility this weekend—said she witnessed clients confined to freezing cells, some of them suffering from serious medical conditions. She described one man with an open wound bleeding into his sheets after being denied adequate care, and said others hadn't received a hot meal in five days.

As of Monday, the government dug into its denials that the power outage affected the heat and water.

"MDC informs us that the electrical outage did not cause the heat to go out, nor did it lead to a lack of hot water, because those systems were not affected by the power outage." pic.twitter.com/Czt9EFjpZM

Donnell Murray, a detainee at MDC, testified that jail employees had taken the temperature of his cell and found it was between 30 and 40 degrees. He added that he was cut off from speaking with family members and attorneys—something that Quay has also denied—and did not feel prepared for his upcoming trial.

"The lights was out. The heat was off, and we was locked in," said Murray. "It was hard on me because it was dark. It was cold. I was nervous."

The hearing came after public defender Ezra Spilke requested a judge look into the "inhumane conditions" at MDC, one of several scheduled for the coming days. It also represented the first time that Bureau of Prisons employees were called to testify under oath about conditions at the troubled jail. Their attempts to delay the hearing, and a subsequent visit to the jail by Judge Torres, were denied on Monday night.

Quay was not present at Tuesday's hearing. But employees of the jail who did testify offered details that directly conflicted the warden's staunch denials, and the Bureau of Prison's own assessment that the jail was "experiencing a partial power outage" related to an electrical fire last Sunday.

According to MDC facility manager John Maffeo, the heating issues at the jail preceded the fire. A heating coil broke six days before the electrical fire, at which point, Maffeo said, the jail staff knew "we wouldn't be able to provide heat in the south unit during that round of repairs."

Rhonda Barnwell, who works as a medical technician at MDC, also confirmed that the jail experienced "very cold temperatures" in the week leading up to the fire. "If the media didn't come, we'd still be in the same situation," she said.

The witness was quoted in the press as saying: "They're just waiting for a disaster to happen."

Asked about this remark, Barnwell stands by it: "Absolutely."

"I'm thinking that if the media didn't come, we'd still be in the same situation," she added.

For some detainees, the disturbing reports of the last week were a continuation of years of neglect at the federal jail, which houses a mix of pretrial detainees and convicted men and women. In April, two lieutenants at the facility were convicted of repeatedly forcing female prisoners to perform oral sex on them, with one victim claiming that several high-level officials at MDC, including the Special Investigative Services Officer, were aware of the abuse.

A class-action lawsuit, filed in 2017, accused the jail of being plagued by "the constant presence of airborne fecal matter, mold, asbestos and other unknown particulate matter." Two years earlier, a lawsuit alleged that Muslim detainees were subjected to wanton humiliation and physical abuse by guards on a regular basis.

On a phone call with reporters Monday evening, David Patton, the executive director of the Federal Defenders of New York, called for the appointment of a special master to investigate the situation at the jail—emphasizing that an investigation by the DOJ would not yield significant results.

"This incident has highlighted the emergency nature of something that is a longstanding problem," he said. "The Justice Department cannot be trusted to police itself."

At 3 p.m. on Tuesday, Judge Torres adjourned the hearing in order to visit the Sunset Park facility. "We may be resuming later," she said. The judge arrived at the jail around an hour later, accompanied by lawyers from both parties, and has not yet emerged. 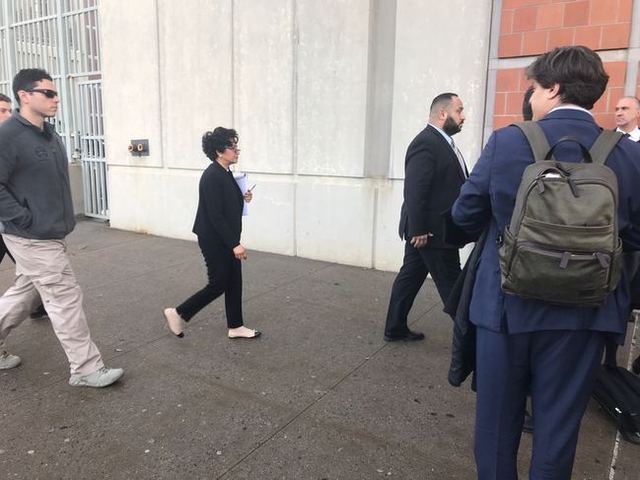 This is an ongoing story and we'll update as more information becomes available.

UPDATE 9:30 a.m., February 6 Following her visit to MDC last night, Judge Torres briefly reconvened the hearing to ask the attorneys who accompanied her how conditions had changed at the jail.

Compared to her last visit, von Dornum said, "it was much warmer, much brighter, but it was clear that the medical situation had not been rectified." The defense attorney added that the tour did not change her feeling that a special master should be appointed.

Despite this, Judge Torres denied requests to move two detainees out of the jail. On the subject of the appointment of a special master, Torres said that would be addressed in a separate lawsuit filed by the Federal Defenders earlier this week.

Judge Torres pressed the attorneys on what relief she could grant. The major request, a special master overseeing MDC, is the subject of a newly filed lawsuit. She punted that issue to that case.

On the transfer, she found that specific record under-developed for two inmates.

The upshot: Judge Torres declining to rule in the Federal Defenders' favor here does not signal a clean bill of health to MDC.

#doj
#federal defenders
#herman quay
#MDC
#Metropolitan Detention Center
#original
Do you know the scoop? Comment below or Send us a Tip