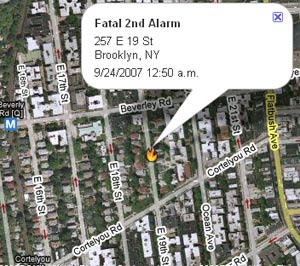 A two-alarm fire in the Kensington section of Brooklyn Three people died while another was taken to the hospital in serious but stable condition.

The house on East 19th Street near Beverly Road is described as a two-and-a-half story house. The fire started in the attic and moved very quickly. Two adult women, ages 76 and 50 years old, were pronounced dead at the scene, and a 12-year-old boy died at New York Community Hospital. The survivor, a 16-year-old boy, suffered burns.