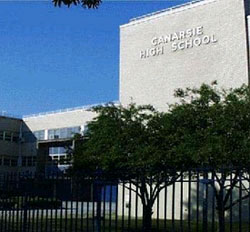 Principal Tyona Washington of Canarsie High School opened up a piece of mail that contained a noose made out of string as well as a 2-page letter containing, per Newsday, "a common racial slur and words suggesting that a black person should not be running the school." The letter also referred to "white power" and had the signature of a white administrator, but police do not believe the letter was from that individual.

Additionally, the NY Times reports that the letter stated, "I'll give you enough rope to hang yourself." The Department of Education says the police were "called as soon as the envelope was opened" and that the DOE was cooperating with authorities. This is the third noose incident reported in the city, after a noose was found outside a Columbia professor's office door and a noose outside the Church Street post office.

The NY State Senate unanimously agreed to hand down stricter punishment to people who use nooses to intimidate others yesterday. And the police have suggested some other hate crimes incidents are the result of copycats. In the wake of these and other hate crime incidents, the Reverend Al Sharpton is planning a protest march on Staten Island in the next few weeks.

And Washington did not comment, but her sister said, "She's very upset and we, the family, are very upset about this."