One of New York City's biggest landlords is on the cusp of digging up a Brooklyn Heights courtyard situated between a historic, rent-stabilized apartment complex and a decaying section of the Brooklyn Queens Expressway. Attempting to block him are tenants who claim excavating 7,000 cubic yards of soil, enough to fill two Olympic swimming pools, will destabilize their building and undermine the structural integrity of a section of the highway.

Joel Wiener of the real estate management firm Pinnacle Group has been pursuing a 97-car subterranean garage with landscaping on top for over a decade. He makes no secret of his desire to generate more revenue from the nineteenth-century Riverside Houses, five red brick apartment buildings that bound the courtyard on Joralemon Street and Columbia Place. "It's a way to increase the value of the property," said attorney Kenneth Fisher, who is representing Wiener.

Tenants have enlisted a nonprofit environmental justice group to fight back, and experts testifying on their behalf say that at the very least, the project needs more scrutiny.

"The BQE could shift," said 80-year-old Bill Kallman, a retired structural engineer for the state Department of Transportation. Kallman worked on New York City bridge restoration projects for three decades, and emphasized the wet, clayey soil of the site. "If it shifts a little tiny bit, it's enough to cause failure of the piling and support for the retaining wall, and you lose the highway. It would be less dramatic than crashing down, but it would be inexorable movement. And it would require a good deal of effort and some luck to stop it."

Like ninety percent of construction projects in the city, the garage was approved administratively: that is, with input from multiple city agencies, but without a public environmental review to assess any "potential adverse environmental effects."

"You would think, 'Well, if it's going to impact the environment, there should be an environmental impact statement,'" said land-use attorney Jack Lester. "Wrong. That's not what the law says. What seems environmentally precarious in the layman's viewpoint may be allowable with the zoning."

Joel Kupferman of the New York Environmental Law and Justice Project examined the project at the tenants' request. Kupferman's report emphasizes the need for a public review. "We're not talking about someone building a chicken coop in their backyard in Staten Island here," Kupferman told Gothamist. "Anything digging below the surface can really affect its surroundings." (Disclosure: the tenants are represented by attorney Steve Dobkin, father of Gothamist co-founder Jake Dobkin.)

The BQE triple cantilever has surpassed its intended 50-year lifespan by more than a decade, according to the Department of Transportation, and is now a priority for extensive multi-billion renovations beginning in 2021. It carries more than 140,000 vehicles daily. (Here's a view of it from above.)

"I've been against this project since I first heard about it," Councilman Steve Levin, who represents Brooklyn Heights, told Gothamist recently. "The whole thing makes me uneasy."

Levin believes that the garage has gotten more scrutiny than most in his district, in large part because of the tenacity of the tenants. Still, a public environmental review "would be a much more appropriate framework to go through, for transparency, absolutely," he said. "It has accountability built into it. Administrative actions by an agency don't have that." 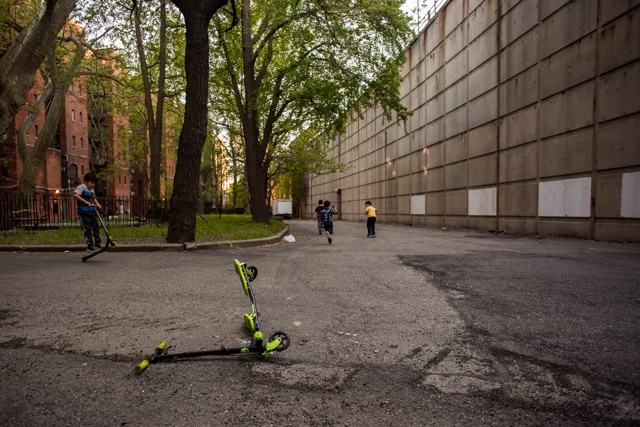 Kids playing in the Riverside courtyard in May 2017. (Scott Heins / Gothamist)

The Riverside Apartments were built in 1890 by Alfred T. White, a Brooklyn philanthropist who believed that the working poor deserve a standard of living conducive to health and happiness. Before Robert Moses cut through the complex to build the Brooklyn Queens Expressway, the apartments swung around a grassy courtyard half the size of a football field, open to residents for picnics and concerts. According to anti-slum crusader Jacob Riis, Riverside was "the beau ideal of the model tenement for a great city like New York."

Wiener's reputation is mixed—he has been investigated multiple times for allegedly flouting rent-stabilization laws. In 2007, tenants in Harlem sued him for allegedly hiking rents to drive them out and make way for condos. (Pinnacle settled to avoid the cost of a trial, according to Fisher. "As with any large organization, sometimes mistakes are made and when they are the company tries to address them and prevent their re-occurrence," he stated.)

"White had some serious involvement in trying to make the world a better place," said Bill Ringler, a Riverside tenant from 1979 to 2015. "You're going to put people out of their homes just so some rich guy can park his Jag?"

A review commissioned by Pinnacle in 2009, before the garage plan was submitted, warns that drilling piles for the garage could cause vibrations "of sufficient magnitude and frequency" to cause "damage to the exterior and interior of the buildings." According to the review, the 30-foot BQE retaining wall is supported by massive, 30-ton concrete piles driven to a depth of about 40 feet, which likely extend under the excavation area.

Final excavation plans filed in 2011 show that while the garage will stand sixteen feet away from the BQE, the excavation itself will touch the BQE wall. Kallman, the former state DOT engineer, testified to the "absolute need to prevent excavation above or around these retaining wall foundation piles." During the dig, city DOT (lead on BQE repairs since the state pulled funding in 2011) would not be able to access this section in an emergency, he added.

"If that cascade of events takes place, then they'll figure out what to do about it at the time," Fisher, the attorney, said. "They'll fill up the frickin' hole or put a platform over it or do something else. But it's speculation based on speculation."

Klaus Jacob, a Columbia University environmental disaster expert, conducted a review of the Riverside garage plans for the tenants and noted that the site would likely flood in a hurricane of Sandy magnitude. He recommended further investigation to determine if, under flood conditions, "the stability of the BQE foundations... and of the foundations of said residential properties... could be potentially compromised." 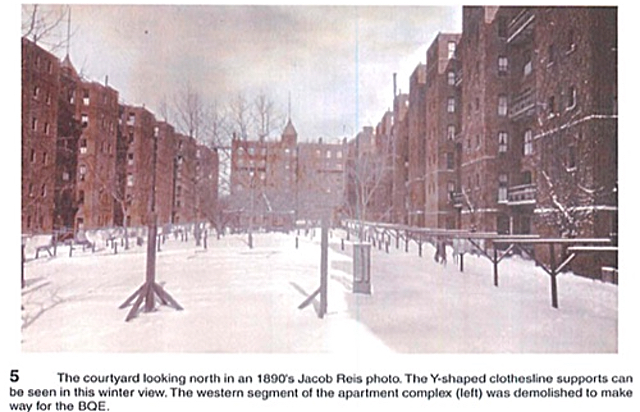 Approving the garage plan required input from multiple agencies because it's situated on a historically landmarked property adjacent to two major pieces of infrastructure: the MTA's Joralemon tunnel, which serves the 4 and 5 trains, as well as the BQE. The Landmarks Commission reviews for aesthetic integrity, while the DOT and MTA review possible impacts to their infrastructure. All relevant city agencies have approved the project, spokespeople confirmed.

According to Fisher, "political pressure" compelled every agency to go through the garage plans "with a fine-toothed comb." In October 2014, Senator Daniel Squadron organized a meeting with agencies that resulted in a stop work order and audit. According to the Department of Buildings, inspectors found that the plan did not "show safeguards" to protect the "BQE structure and existing... apartment buildings."

The order was lifted in August 2015, on the condition that DOB install monitors on the buildings, and stop work at the first indication of cracking or movement.

But the tenants say they'd much prefer a discussion of environmental impacts in a forum open to the community.

"I'm not sure this is really on board members' radar," said Rob Perris, district manager of Brooklyn's Community Board 2, which includes Brooklyn Heights.

"We all know the BQE has gone beyond its useful life," said Peter Bray, director of the Brooklyn Heights Association. "I attended arguments about the plan that took place at New York State appellate court, but nobody would call that a public hearing. The whole city process for allowing development to occur is stacked against the community interest." 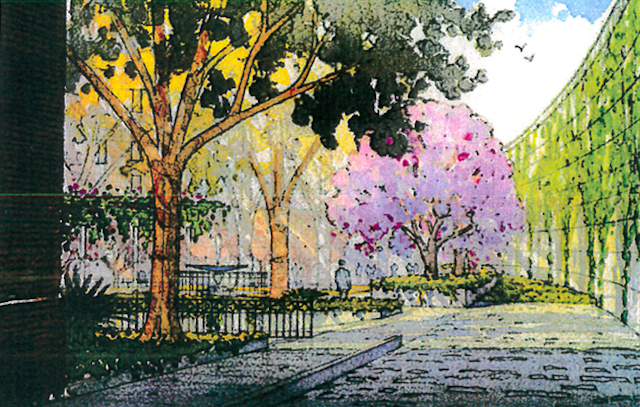 A full-blown environmental review isn't an easy get. They're typically reserved for projects that require a zoning variance, like the East New York Rezoning Plan. When exceptions are made it's often for large projects like residential towers that could strain local amenities.

"For all the other cases, it becomes a battle of landlords and tenants," said Eve Baron, chair of the Pratt Graduate Center for Planning and the Environment. "And the landlords have more power."

Jacobs, the environmental disaster expert, noted the residential development planned for floodplains along the Brooklyn and Queens waterfront. "We have bigger fish to fry," he said. 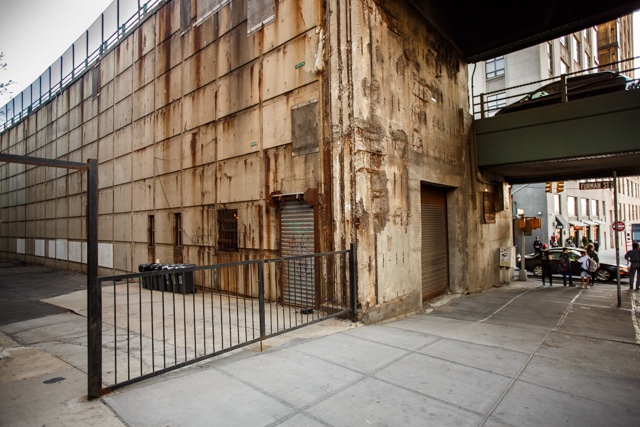 The entrance to the subterranean garage would be to the left. (Scott Heins / Gothamist)

Wiener won't break ground on the Riverside garage until the state Division of Housing and Community Renewal confirms landscaping on top of it, including new trees and a fountain, can be used to justify lifting a rent freeze on the property. About 60 of the 155 apartments have been under a freeze since the mid 1990s, when the courtyard was illegally paved over. The tenants have fought Wiener's DHCR application in court since 2008, arguing that simply replacing concrete with grass would restore the courtyard just fine. (A DHCR spokeswoman said the agency does not comment on open cases.)

Many of the apartments are market rate, thanks to turnover and overcharges, according to the tenants' attorneys (Fisher denied this, saying that only one apartment is market rate). Still, some tenants pay less than $1,000 per month—a unicorn in Brooklyn Heights. According to Fisher, tenants are fighting the garage because "they don't want their rents to go up."

"It's hard to have confidence in a landlord whose entire business model is buying up regulated buildings, and forcing tenants out," countered one tenant who spoke anonymously, fearing retribution. "We believe the entire parking garage is a ruse to structurally destabilize the building."

Asked to comment on the garage approval, City Hall deferred to DOB.

"This project has been extensively reviewed by DOB, including a post-approval audit, as well as by multiple other city and state agencies," a spokesman stated. "The Department will closely monitor this project, but if tenants have concerns, they should report them to 311 and DOB will respond as quickly as possible."

The Mayor's Office provided Gothamist with various approval letters for the project, including one dated June 2015 from city DOT. CC'd on that letter is Robert Collyer, DOT deputy commissioner for bridges, and a lead on the BQE project. We approached Collyer last fall after a public meeting about the upcoming renovations. He said he was not aware of the garage plan.

"I don't see the plans that come in for review and approval," Collyer said. "Me, personally, I wouldn't see it. Maybe ever. But when the project starts and we go out there to look, then I'll want to know how they got approval. It doesn't slip through."

Could DOT hit the brakes at that point?

"Well," Collyer said, "If it's already been approved, getting it to stop is not going to happen."