At a contentious town hall with Brooklyn Heights residents late last month, the city’s Department of Transportation presented a plan to reconstruct the crumbling Brooklyn-Queens Expressway that would require the Brooklyn Heights Promenade to be shut down for six years. The other option, which the city says would take longer, would involve reconstructing the highway lane by lane, and would close the promenade for only two years.

It didn’t take long after the meeting for Brooklyn Heights residents to leap into action with a campaign to “save the promenade.”

One resident quickly created a change.org petition that has more than 4,000 signatures as of this writing, while a separate group of concerned neighbors set up a website, complete with a custom logo, requesting people’s email addresses and urging them to “join the fight.” The Brooklyn Heights Association issued a statement urging the city to go “back to the drawing board” to consider other options.

“I think this issue really resonates with people,” said Laura Winner, who created the change.org petition after her children saw a sign in the neighborhood about the promenade closing and wanted to do something about it.

“It is a tough problem, but I really don’t think they have done enough research and come up with enough alternatives,” Winner said. “The city says they want cleaner air and want to be more pedestrian-friendly and here they are proposing to tear down something that acts as a structural barrier to the BQE and acts as a pedestrian walkway.”

The six-year plan, which the DOT presented as their preferred option, would involve building an elevated six-lane highway over the BQE that abuts the promenade, while construction takes place on damaged portions of the BQE below. 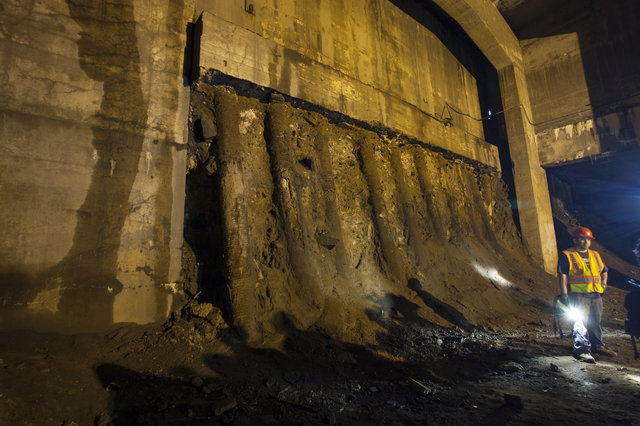 While many opposing the plan are concerned about the temporary loss of a beloved public space and the noise and air pollution they would experience if the highway was at street level, the residents of 160 Columbia Heights, an 84-unit coop building adjacent to the promenade that appears to be in the way of planned construction, are more worried about their building being condemned.

“My husband is already coming up with cockamamy plans to move to Hudson,” said Michael Canter, an architect and member of the board of the coop who has lived there since 1999. “I said I don’t think we can turn around and sell this apartment right now. No one is stupid enough to buy it and it’s kind of immoral to abandon this and our neighbors without knowing what the outcome would be.”

Canter said other coop members have told him they are considering moving, but are hesitant to speak about it publicly.

“While we plan to generally stay within the existing footprint of the BQE during reconstruction with the DOT proposed options, we are still in the preliminary stages of design,” Alana Morales, Deputy Press Secretary for the Department of Transportation, said last week. “So at this time we do not know what—if any—property will need to be acquired.”

She added that details on the process, cost and timeline of the project are still yet to be determined.

Many residents say the city should work with state legislators to implement congestion pricing to reduce traffic on the highway, while pursuing traditional lane-by-lane construction or another option. Peter Bray, executive director of the Brooklyn Heights Association, said he believed Department of Transportation officials were “open to looking at other options,” as Transportation Commissioner Polly Trottenberg promised at the town hall meeting.

But that was before Mayor Bill de Blasio told WNYC’s Brian Lehrer on Friday that he supports the six-year plan.

“There’s basically two options that I’ve been briefed on,” said de Blasio. “[The lane-by-lane option] would cause a huge number of vehicles to go through the streets of Brooklyn and clog up residential areas and business areas and I think that’s extraordinarily problematic and it would also take longer.”

He called the elevated highway option the “pull the Band-Aid-off approach.”

Have you visited our table at the Montague Street Fair?! We are right outside of Key Food. Come by and learn more about how we are going to #savethepromenade together 💪🏻💪🏼💪🏽💪🏾💪🏿

“It’s a painful approach,” said de Blasio. “It will definitely create a lot of inconvenience for people...but I think it’s the way to address the bigger problem once and for all and as quickly as we can do it.”

The organizers behind SaveThePromenade.org sent out an email urging people to call the mayor’s office to express their opposition to the plan over the weekend. Brooklyn Heights residents also tabled and sought to spread awareness about the potential closure of the promenade during a street fair on Sunday.

“DeBlasio's [sic] statement makes it clear: The city has never been interested in public feedback,” the organizers wrote in their email. “It intends to ram this highway through the heart of Brooklyn Heights without considering alternatives and without accounting for the destruction, environmental and human, it will cause to our neighborhood for a generation.”

#bqe
#brooklyn heights
#brooklyn promenade
#brooklyn queens expressway
#dot
#original
Do you know the scoop? Comment below or Send us a Tip
A new Gothamist is coming! We’ve moved comments over to our beta site. Click here to join the conversation and get a preview of our new website.