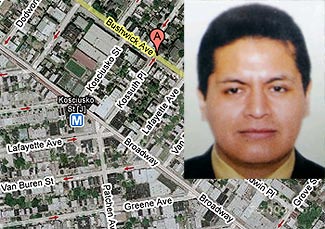 Brooklyn real estate agency owner Jose Sucuzhany, who was brutally beaten last week, died yesterday. Sucuzhanay had been declared brain dead last week but, the NY Times reports, his "kept him on life support in anticipation of his mother’s arrival, but on Friday, his heart stopped."

The police are looking for suspects in the beating, which they consider a hate crime. Sucuzhanay and his brother had been walking near Kossuth Place and Bushwick Avenue—arm in arm because they were drunk—when a SUV pulled up. The vehicle's passengers yelled anti-gay and anti-Hispanic epithets at them. According to the Daily News, "The attackers jumped out of the car and smashed a beer bottle over Jose Sucuzhanay’s head, hit him in the head with an aluminum baseball bat and kicked him... [His brother] was able to get away; the attackers drove off after he returned and said he had called police."

Another brother, Diego Sucuzhanay, said, "I am at a loss beyond words over the passing of my brother. We just need time to cope." His family said Jose Sucuzhanay, who had two children who live still in Ecuador with grandparents, arrived in the U.S. ten years ago; the Times reports, "He was a waiter for seven years before he got a real estate license three years ago and started his own agency, Open Realty International, in Bushwick."

There is a vigil for Sucuzhanay planned for 2 p.m. today (details); participants will walk from Myrtle Avenue Grove Street to Bushwick Avenue and Kossuth Place. According to Joe. My. God, "NYC Council Speaker Christine Quinn, and representatives from the Human Rights Campaign, the NYC Anti-Violence Project, the NAACP, the NYCLU, the NYC Immigration Coalition and other LGBT and Latino groups will attend."