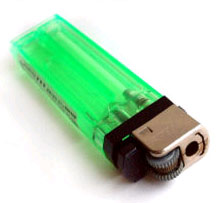 The East New York apartment fire that left a baby dead may have been started by one of her siblings. Relatives tell the Daily News that 3-year-old Shamel Webb had been playing with a cigarette lighter that ignited his little sister's stroller blanket. Five-year-old sister Aalayah tried to get 1-year-old Melanie out of her stroller, but couldn't, so she ran for help. The children's mother Althea Webb had gone out to get them Chinese food; Webb was arrested yesterday.

Tommy Campbell, the neighbor who helped Aalayah and Shamel out of the building but couldn't save the baby because there was too much smoke, said either child could have accidentally set the fire, "She said, 'He was playing with [the lighter].' And he said, 'She playing with it," but still called Aalayah a hero, "If it wasn't for her crying, maybe the little boy would have perished, too." And Webb's husband Shamel did not blame his wife for the fire: "I lost my daughter, and now they are trying to take my wife from me. They are trying to say she is a bad parent."

And in Bedford-Stuyvesant, fire officials believe that an apartment fire was started by children playing with matches. Eight people were injured, including a 2-year-old and his mother.