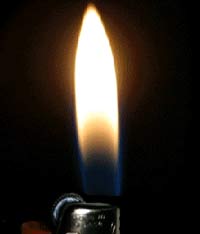 The Thursday night fire in a Bedford-Stuyvsant brownstone that left a 3-year-old child in critical condition seems to have been caused by her playing with a butane lighter. There is also a tragic coincidence: In 1992, an apartment fire claimed the life of a 1-year-old sister.

Gabriela Rogers, known as "Gabi," who suffered burns on 70-75% of her body, is still at New York Prebyterian Hospital/Weill Cornell Medical Center. She and another young sister Camilila were being watched by their 14-year-old brother Lamel while their father went to the store. The Daily News reports that Lamel and a friend were able to get the girls out safely, but Gabi ran back in to look for their dog. She was trapped in the rear of the apartment, and firefighters crawled under the blaze to rescue her.

The News had details about the 1992 fire: The parents had left 1-year-old Gabriel, plus two other children, ages 7 and 9, home alone when a fire broke out. The parents claimed to have been at work or returning from work, but they were unemployed at the time. Now, 22-year-old sister Camilla Rogers, who spent 9 months in the hospital after the 1992 fire, told the News about Gabi, "Seventy-five percent of her body is burned. She's moving though and talking and wants juice. But they had to put the tube down her throat....She wants to take it out."

Now, the Administration for Children's Services is looking into whether 14-year-old Lamel should have been watching over his siblings - and if his parents should be charged with negligence. (FWIW, 14 is usually old enough to baby-sit.) A family friend told Newsday that Gabriela was asking about her dogs before being sedated. He added that the family was living in a hotel, since their home was devastated in the fire, provided by the Red Cross. And earlier this month, a 9-year-old Staten Island boy died in a fire after running back into his home to save his pets.