The Kings County Democratic County Committee voted overwhelmingly to endorse Jumaane Williams for public advocate Tuesday night, in a leftward shift for an organization that has been seen as tightly controlled by centrist party bosses. Yet even as reform advocates cheered the straw poll vote, they cautioned that changes to committee rules and increased transparency are moving ahead slowly, if steadily.

"[The party bosses] realize that we have agitated and we have mobilized. And they understand that their very existence is now being threatened,” said Ernest Skinner, a longtime progressive county committee member in Brooklyn’s Caribbean community who currently serves as a community liaison for New York City Councilmember Jumaane Williams. “So, they’re doing it in self interest, which is wonderful. I’m alright with that.”

“Everything that they’ve asked to put on the table is incrementally being considered, negotiated, acted upon, modified,” replied Jeffrey Feldman, executive director of the Kings County Democratic Party. “I mean Donald Trump wants a $5 billion dollar wall. Is anybody giving him a $5 billion wall? The answer is no. Is he going to get a $1 billion wall? Very likely.”

In one sense, the committee’s vote to back Williams was no surprise. Williams is popular in his home district, which includes Flatbush, Midwood, and Canarsie, and he had previously received the endorsement of county boss Frank Seddio. Still, Williams is a rebellious representative who proudly bucks convention and touts his clashes with authorities.

So, it made sense that shortly before the vote, Williams winkingly punctuated his stump speech with bemused pride at having landed Seddio’s endorsement: “I’m so proud to have the endorsement of so many clubs, lefty crazies like me, and for one of the first times, Frank Seddio as well.”

According to committee officers, the poll counted ballots cast by over 500 committee members in attendance as well as an additional 600 “proxy” votes from absent members who ceded their votes to other leaders. Jonathan Harkavy, committee deputy director in charge of tallying the votes, said the vast majority of proxies, more than 350, were held by Seddio. However, according to Lewis Fidler, the former city councilmember who was tallying Seddio's proxies in the front row, the county boss had distributed them to district leaders where the absent members reside instead of casting them himself as a single bloc, as he has in the past. Williams ultimately won 609 ballots for 64 percent of the vote.

Williams's pointed acknowledgement of Seddio’s support reflected an undercurrent of awkward conviviality at the meeting, as reformers and party bosses sought to navigate a budding partnership. The committee’s reform-minded Democrats, who gained new recruits last year during election-season organizing efforts, have been clamoring for greater transparency and inclusiveness in their party’s inner workings, including changing how proxy votes are cast, convening the county’s long-dormant standing committees, and requiring that assembly district committees actually meet. The party bosses have been wary of the newcomers, but acknowledge the reformers’ increasing influence and have been making incremental concessions. Several of those reform initiatives are currently under review and are inching their way through committees.

It’s hard work, reformers say, but the party bosses are bending little by little. Brandon West, leader of the reform group New Kings Democrats, says he has received several private offers from Seddio to play a greater role in the leadership. West welcomes the overtures, but says that those quiet one-on-one deals are part of what his group is seeking to change.

“It definitely shows there is a very different vision or opinion about these things,” West said, recounting recent wrangling over a request to allot time for new reforms to be suggested at future meetings. “It took a ton of work to get here. It’s insane.”

Briefing his team near a slushy street corner before the meeting, West said his relationship with the committee leaders was marked with broken promises. Seddio, he said, had called him on Sunday night to promise him an hour of time for “open discussion” of a slew of issues important to reformers at the meeting. That hour never materialized. In fact, the official printed agenda only reserved time at the very end of the night for “Open discussion by the Members (if time permits).” 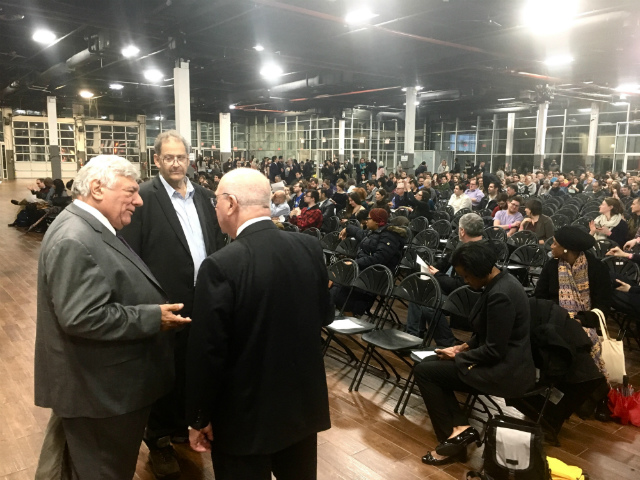 It was not until 2 hours and 45 minutes into the evening, with less than 10 minutes left in the event, that County Committee Chair Joe Bova allowed a few questions from reformers. Skinner asked if the committee would consider ejecting party heretic State Senator Simcha Felder from the party for his past alliance with Republicans, which drew wild applause. Bova agreed the issue would be addressed by the next meeting.

When West and Melissa Gradel, a member from the 44th Assembly District, pressed Bova on whether the rules could be revised to allow for a full hour to introduce and discuss proposals, Bova dodged directly addressing the question. At that point, Seddio took the microphone.

“I began the meeting by telling you we were trying to do this. So please don’t be so antagonistic,” Seddio said, chastising Gradel. He went on to say members could email their questions to the committee. “If you do that in advance, we can address it in a better and more congenial manner.

“Everything that you present to us between now and the next 180 days will be addressed by the executive committee and we will put it online to make sure you saw it and have that dialogue back-and-forth,” Seddio said. The crowd cheered.

Several members noted that the tenor of this meeting was remarkably civil, something that couldn’t be said for the last gathering in September.

“If you look at the tone of this meeting as opposed to the other meeting, it turned 360 degrees almost,” Skinner said. 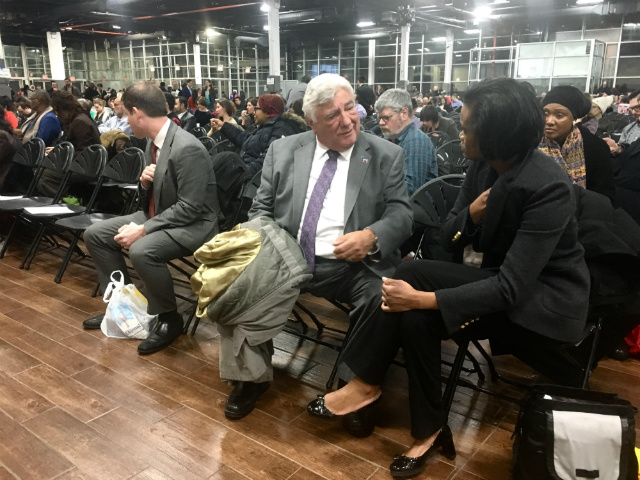 At that September meeting, reformers upended the proceedings with disruptive chants and jeers protesting the complex rules and opaque decision-making process that have long governed the borough’s most powerful political body. After hours of acrimony, the reformers ultimately succeeded in introducing several proposals aimed at bolstering transparency, even as bosses succeeded in electing their slate of candidates to the executive committees using the contentious proxy ballots.

Tuesday night’s straw poll was low stakes, reformers said, having no bearing on control of the committee itself or any meaningful influence on the nonpartisan citywide public advocate’s race.

“This was a little bit of a charade in some way. I support Jumaane and think he’s great. But this was a particularly strange process to begin with,” said West. Williams already had overwhelming support in the community, West noted, and there were several reform measures that could have been discussed instead.

West also noted some apparent fissures between members of the county committee power structure itself. One brief exchange seemed to indicate as much.

As the straw poll ballots were being counted, Seddio told Bova to go ahead and allow open discussion to begin—as West said Seddio had promised. Bova shrugged, and instead put the committee in recess, as people began to mill about the room.

During the recess, Seddio lumbered toward Blake Morris, Sen. Simcha Felder’s one-time primary challenger. “You collecting money for those cookies?” he asked. Morris said he was, in fact, selling cookies to pay off an outstanding campaign debt of $8,000—mostly for mailers. He was wearing a bowler hat with a ribbon advertising his cause. Seddio dropped a $10 bill in his basket. “You owe me four cookies!” Seddio said with a laugh and walked off.

“There’s a lot of smiles and backslapping,” Morris said, looking around the room, noting that this was the friendliest committee meeting he’s ever seen.