Brooklyn DA Vows To Run As Republican Despite The Shouts & Cringes

Brooklyn DA Charles Joseph Hynes formally announced his intention to run for reelection as a Republican on the steps of Borough Hall this morning. A few yards away, two former Brooklyn ADAs leaned against a railing and took in the scene. "Joe Hynes is a good guy. I know Joe," one said. "But he shouldn't be doing this."

The former ADA, who declined to be named because he was speaking so candidly about former colleagues, surveyed the crowd of about 100 Hynes supporters. "At least half of these people are from his own office."

When asked which scandal was most responsible for Hynes's downfall—Wrongful convictions? Pulling punches with Orthodox sex abusers?—the former prosecutor referred to Hynes's top deputy, ADA and rackets chief Michael Vecchione, who was excoriated by a federal judge for his part in convicting a man who served 16 years in prison for a murder he didn't commit. 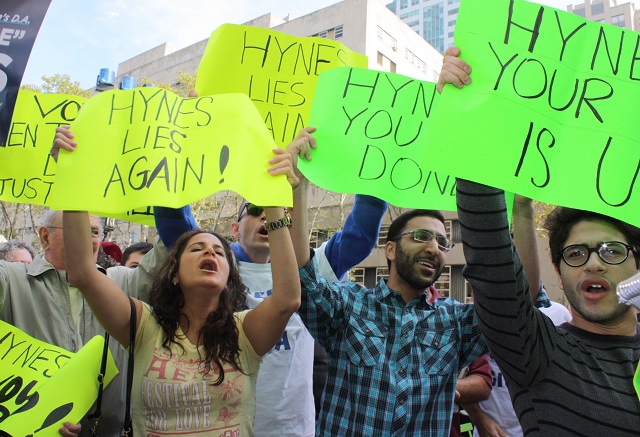 Hynes, who was joined by state GOP chairman Ed Cox and Republican State Senator Martin Golden, could barely make his announcement over a group of a dozen or so protesters shouting "Hynes must go!"

When he did speak, he promised to bring a community court to Brownsville, maintain the alternative sentencing and re-entry programs he said were derided by Thompson as "social work," and repeated the unfounded accusations that former corrupt Democratic Party head Clarence Norman, Jr., ran Thompson's campaign.

After 10 minutes of assailing Norman and Thompson's character, Hynes curiously added, "If Thompson had the guts to say, 'That's my campaign manager,' I wouldn't have an issue with it." Should Thompson's campaign be investigated for his involvement with "a serial thief" and "extortionist?"

What about the fact that the Rev. Taharka Robinson, a former felon and one of Norman's protegés, helps run his own campaign?

"I think there's a very easy answer to that…There's a profound difference between a dopey 17-year-old kid who does something stupid, commits a serious crime, goes to prison, gets out, and becomes an ordained minister, and someone who's one of the most powerful Democratic leaders in this state."

Has Hynes raised any more money aside from the $150K he got from Bay Ridge residents last week? "You'll have to ask my treasurer," he told a reporter after promising that he had enough money to run a "credible and successful campaign."

Brooklyn hasn't elected a Borough-wide Republican in half a century, both Satmar sects endorsed Thompson, Senator Chuck Schumer endorsed Thompson, and Brooklyn is overwhelmingly Democratic. A reporter asked Hynes how his odds of winning aren't "impossible."

"I'd be the first Democrat ever elected on the Republican and conservative ticket, that's how." The crowd cheered. 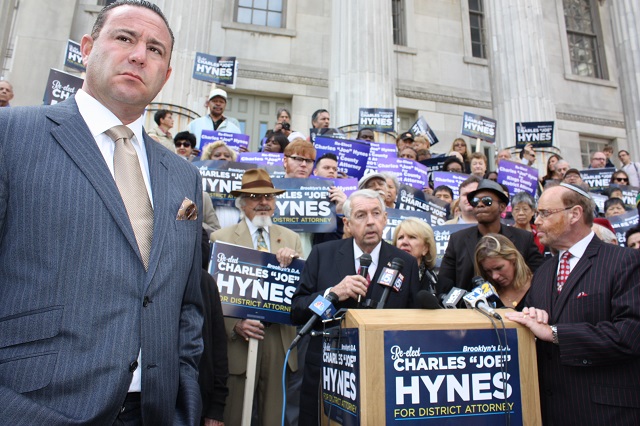 None of the Hynes supporters we approached would speak on the record. Many repeated the phrase, "Joe Hynes is the right man for the job" and excused themselves. One man wearing a shimmering grey suit and a fedora said he had lived in Bay Ridge for 30 years and that Hynes "kept the neighborhood safe."

What about all the sloppy prosecutions? "You can't blame him for that. If you run an office for over 20 years there's bound to be some bad things happening, so you can't judge him for that."

The man declined to give us his name, but left us with a compliment: "I dig your style."

#brooklyn da
#charles hynes
#ken thompson
#tilting at windmills
#ugly political races
#original
Do you know the scoop? Comment below or Send us a Tip