The Department of Transportation on Tuesday night presented a proposal [PDF] for curbside protected bike lanes running north and south on a dicey stretch of Jay Street between Sands and Schermerhorn streets in Downtown Brooklyn. The 1.4 mile roadway is key for bike commuters, and is currently served by standard, painted bike lanes. Cutting near courthouses, a police station, a borough jail and university buildings, Jay Street is also notorious for u-turns, red-light running and bike lane encroachment that forces cyclists to swerve into traffic. 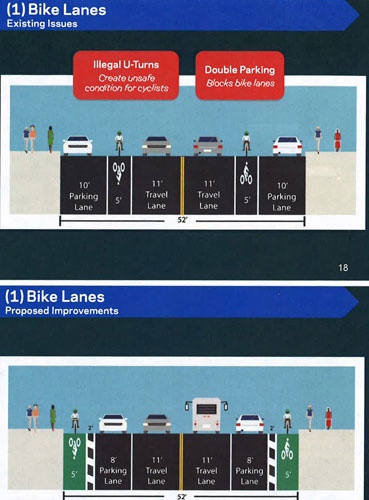 The DOT's proposal (via)

The proposed north and southbound lanes are five feet wide, with two-foot painted buffers separating cyclists from eight-foot parking lanes along most of the corridor.

The parking lanes are broken up intermittently on both sides of the street to accommodate bus stops, where cyclists and buses must share the lane. The DOT's proposal does not call for the installation of jersey barriers or plastic bollards along the parking lane. According to the department, physical barriers would block street sweepers from the curbside.

Voted Brooklyn's Scariest Bike Lane in 2012, Jay Street saw more than 68 crashes between DUMBO and the Fulton Mall between 2011 and 2014.

Asked if shared bus-bike lanes have been installed successfully elsewhere in the city, Sean Quinn, the DOT's director of bicycle and pedestrian programs, admitted the setup is "fairly unique."

"The buses have to cross the bike lane to get to the curb. It will just be a bigger area to do it in," he said.

Updates for the bus stop-heavy stretches on Smith Street between Fulton and Schermerhorn and the Myrtle Promenade between Myrtle and Johnson streets are still in the works, but will likely involve only paint. According to DOT bike director Hayes Lord, the MTA was "concerned that any physical objects would impede their operations." 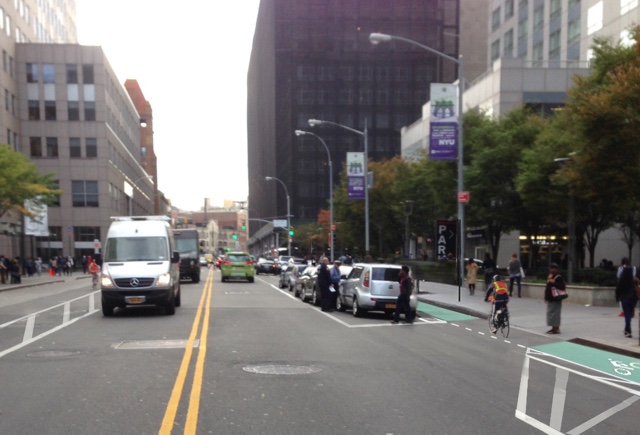 A rendering of the proposed lane between Myrtle and Johnson (via DOT).

Critics argued on Tuesday that physical barriers are the only way to prevent cops and municipal workers from double parking along the roadway and practicing so-called "placard corruption"—when city workers take advantage of their right to park in no-parking zones.

Community Board 2 member Bill Harris seethed about "freeloading city employees" who have "basically taken over downtown Brooklyn," and charged that, "Until somebody stands up against them… we're all wasting our time." The room erupted in bitter laughter when Lord suggested that the DOT could get rogue drivers to "fall into line" with a curbside education program. Councilmember Stephen Levin described the "abuse of placard parking" as a "uniform thing" that he, and likely even Mayor de Blasio, had little control over.

CB2 rejected one aspect of the Jay Street proposal outright—a new crosswalk at the base of the Manhattan Bridge off-ramp just north of Nassau Street. The committee argued that directing pedestrians to cross at the base of an off-ramp where cars tend to speed from the bridge to the nearby BQE connector seemed more dangerous than the current condition. As it now stands, Manhattan-bound pedestrians run into a fenced island on the east side of Jay Street, with no protected crossing.

According to the DOT, bikes make up a full 34% of all street traffic on Jay Street during rush hour. If approved, the Jay Street lanes will complete a spine of protected bike lanes from Midtown Manhattan to Downtown Brooklyn, including the newly-approved Chrystie Street bike lane.

Not all bad. #bikeNYC gets to use peds as human shields at Manhattan bridge off ramp #fixjayst pic.twitter.com/yWXq6avR1Z

Also on Tuesday, the DOT updated a controversial plan that would have downgraded the protected bike lane on Jay Street between York and Prospect Streets to make room for two-way traffic. The new proposal [PDF] calls for a two-way protected path on the west curb of Jay Street on that block, and scraps the two-way traffic idea. It was unanimously approved.

After the meeting, Prospect Heights cyclist Brandon Chamberlin was incredulous. "Every time the DOT does a project they say they're going to do education and that it won't be a problem," he said. "If education is such a silver bullet, I'm outraged the DOT hasn't done it already." He also predicted that shared bus-bike lanes will force cyclists to "juke around a bus into traffic."

Chamberlin held up an alternative rendering for Jay Street from a 2010 DOT study that didn't get play in Tuesday's meeting. In it, northbound bus service is shifted from Jay Street to Adams, and Jay becomes a wide southbound bus lane and a single northbound car lane, separated down the middle by a fence-protected two-way bike lane (according to the DOT, a two-way bike lane on Jay Street isn't feasible because of the "frequency of buses on both sides").

A 2010 proposal for Jay Street that didn't get air time on Tuesday (via).

Doug Gordon, a cycling advocate from Park Slope, was less cynical. "I would urge the community to not let the perfect be the enemy of the good," he said. "We are not going to fix placard abuse in our lifetimes probably. But the green paint will hopefully put more political pressure on the police department."

CB2's transportation committee ultimately approved the Jay Street plan as drafted, excluding the Manhattan Bridge off-ramp near Nassau and the stretch from Fulton to Schermerhorn on Smith Street. A revised proposal will go before the full community board. Assuming approval, the DOT says that the Jay Street lanes could be installed as soon as this summer.

#bike lanes
#cyclists
#dot
#jay street
#protected bike lane
#original
Do you know the scoop? Comment below or Send us a Tip