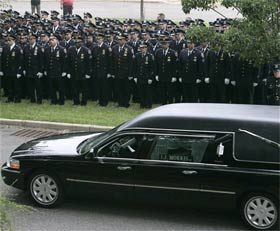 Yesterday, the three men charged with first-degree murder of police officer Russel Timoshenko all pleaded not guilty in Brooklyn court. However, Dexter Bostick, Robert Ellis, and Lee Woods, who were also charged with a number of other crimes related to the July 9 traffic stop shooting, did not ask for bail. The Post and Daily News had the varying statements the men gave investigators:

Woods, 29, told detectives "I ain't going to jail for something I didn't do. I didn't shoot no cops, I was only driving. Fat boy [Bostic] was in the passenger seat and that faggot Roger [Ellis] was behind me."

Ellis, 34, said he was driving his ex-con pals around "looking to get some money, rob someone on the street," when he heard shots ring out.

Timoshenko's alleged killer, Bostick, 34, claimed, "I wasn't even there."

Hynes also added that there was a wealth of evidence, based on surveillance video and the weapons found, "I have never seen the kind of forensic investigation that was carried on." It turns out that the gun that killed Timoshenko was from a Virginia gun shop, whose guns have been involved in 1,000 crimes. Further, the same .45-caliber Llama was used in a Queens shooting on July 8.

And last Thursday, thousands of people attended the funeral of Officer Timoshenko.