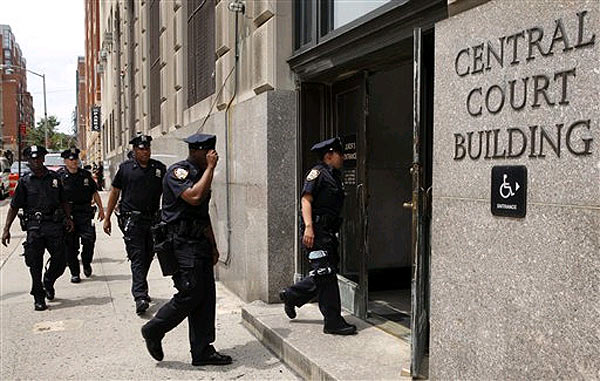 Hundreds of police officers headed to Brooklyn's criminal court for the arraignment of Dexter Bostic and Robert Ellis, suspected of shooting two Brooklyn police officers who had pulled over their stolen SUV during an early Monday morning traffic stop. Bostic and Ellis, who had been extradited from Pennsylvania on Thursday, were held without bail. Neither man spoke during the arraignment, which formally charged them each with "two counts of attempted murder, two counts of assault on a police officer, hindering prosecution, three counts of criminal possession of a weapon and tampering with physical evidence." Bostic was charged with violating his parole as well.

Assistant Brooklyn DA Anna-Sigga Nicolazzi demanded DNA samples from the pair, and Judge Richard Allman allowed a detective to collect the samples in court by swapping Q-Tips in Bostic's and Ellis' mouths. Nicolazzi said that the samples were needed to test against fast food containers found in the stolen SUV; the NY Times and the Daily News described the open court evidence collection an "unusual move."

The police also showed the three weapons found near the SUV, which was abandoned after hte shooting. Friends of Bostic, Ellis and Lee Woods, the man police believe was driving the SUV (but did not fire), say that the trio admitted they were involved with the shootings of officers Russel Timoshenko and Herman Yan. However, none admitted to actually being a gunman. The Post reports:

Authorities have continued to build a case that they say proves Woods was behind the wheel and in the process of loading his Tec-9 gun when Bostic pulled his .45-caliber handgun and fired at Timoshenko twice in the face from the front passenger seat.

Ellis, sitting in the back, fired five times with his 9 mm pistol, shooting Yan twice, once in the arm and once in the chest, authorities say.

The federal Bureau of Alcohol, Tobacco and Firearms has traced the history of the guns. The 9 mm, which was bought in Tennessee five months ago, has so far been traced to one owner who is in jail.

The .45 was bought eight years ago in Virginia by a man who has since died. His family is assisting the feds with their inquiries.

The Tec-9 was bought 11 years ago in Alabama. The owner sold it several years later to a couple, who later sold it to another man. Cops were able to find that man on a vacation cruise, and he said he'd sold it, too.

This comes as Mayor Bloomberg criticized Congress for refusing to give police officers broader powers to trace illegal guns.

Ellis' lawyer claimed that her client was not a shooter, "The evidence is going to show that at the time of the actual shooting, my client was driving the car." Ellis' lawyer also said that Ellis was beaten by police officers after his capture in the Pennsylvania woods. The NYPD denied the claim, pointing out that Ellis was apprehended in "public view," and that Ellis could have sustained those injuries while on the run.

Bostic and Ellis were taken to Rikers Island, and the case is adjourned until August 3. When the judge left the courtroom, police officers cheered and applauded.

Officer Timoshenko is still in critical condition at Kings County Hospital after being shot twice in the face. ADA Nicolazzi said he's brain-damaged, paralyzed and cannot breathe on his own. Officer Yan was shot in the chest (his bulletproof vest stopped a bullet) and the arm and was released from the hospital on Tuesday.