A group of outraged Brooklyn College students gathered in protest outside the campus library on Thursday afternoon to demand the firing of Mitchell Langbert, an associate professor who penned a blog post last week describing sexual assault as a male rite of passage.

"Brooklyn College is a public institution that educates, employs, and welcomes people of all races, religions, political affiliations, and genders," said Corrinne Greene, president of the college's Young Progressives of America chapter. "CUNY and Brooklyn College have a responsibility to provide a safe learning and working environment."

Langbert's presence, Greene said, violates "the right of students and faculty to learn and work in an environment free from threats of harassment or violence" and "must be taken as a credible threat to the safety, security, and rights of the campus community."

Langbert, an associate professor of business management, rocketed into the news cycle Wednesday morning when a short blog entry he'd written nearly a week earlier attracted attention online. Commenting on the allegations against Supreme Court nominee Brett Kavanaugh—whom multiple women have accused of serial sexual predation—Langbert posited that, "If someone did not commit sexual assault in high school, then he is not a member of the male sex."

"The Kavanaugh hearing is a travesty, and if the Republicans are going to allow the sissy party to use this travesty to stop conservatism, then it is time found a new political party," Langbert wrote. "In the future, having committed sexual assault in high school ought to be a prerequisite for all appointments, judicial and political. Those who did not play spin-the-bottle when they were 15 should not be in public life."

In a statement to Gothamist, Langbert called his post "satire," a defense he seemed to have settled on only after multiple reporters contacted him. He subsequently updated the post, describing it as a "satirical piece in the tradition of [Jonathan] Swift's (1729) A Modest Proposal." That defense looks fairly thin when viewed in light of his statements to other news outlets on Wednesday, however: He failed to mention satire to the NY Post and Bklyner, instead doubling down on the men-as-natural-predators narrative and contending that "sissy" Democrats routinely "manufactured events" to discredit their opponents—himself included.

"Threats of sexual assault are not a political perspective," Greene said Thursday. "Party affiliation is irrelevant when it comes to threatening violence."

“Threats of sexual assault are not a political perspective”—YPA at Brooklyn College student protest of Prof. Mitchell Langbert pic.twitter.com/LtINbuYJly

The assembled student activists, she continued, had five demands: That the college undertake a full, public investigation of Langbert's conduct during his tenure, and "in accordance with evidence from the investigation," fire him; that College President Michelle Anderson and the business department issue public statements condemning his blog post; that all faculty and administrators undergo mandatory, in-person anti-sexual assault and harassment training; that students currently taking Langbert's classes be allowed to drop them without academic or financial penalties; and that Anderson facilitate a campus forum on sexual violence and disciplinary response to employee misconduct.

Additionally, Greene asked students to file Title IX complaints against Langbert, alleging that his writing violates CUNY's sexual misconduct policy. Daphna Thier, president of the Brooklyn College Socialists, read from the complaint the activists had already filed: "What [Langbert] did is tantamount to incitement, and should be treated as such. It should be obvious that publicly stated support of rape or sexual violence isn't [a] legitimate political viewpoint." Langbert's words, the complaint continued, created "an inhospitable environment for women on campus," an environment in which it becomes prohibitively difficult to learn and work. 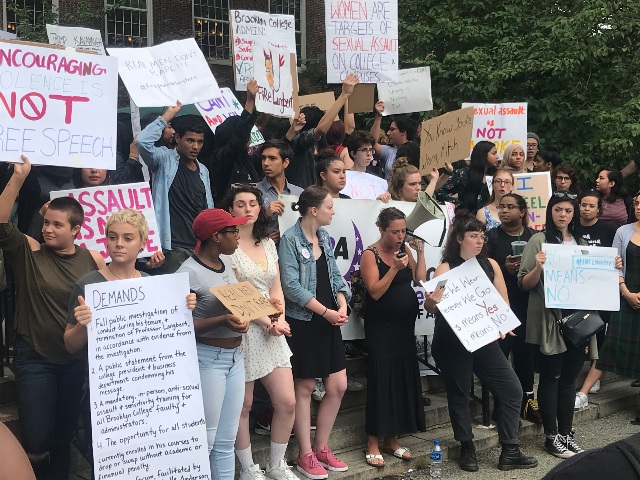 Most of the students who gathered cheered in support of the activists who spoke, joining in chants of "When women's rights are under attack, what do we do? Stand up, fight back!" and "Whatever we wear, wherever we go, yes means yes and no means no!"

Most booed on cue at quotes from Langbert's screed, but not everyone who showed up shared in the outrage. Sophomore Logan Santos, for example, sparked a confrontation that disrupted Thier's speech. Inserting himself in the wall of student activists facing the crowd, Santos seemed to voice a viewpoint that upset his peers. An argument flared, but was ultimately drowned out by a few rounds of "Hey hey, ho ho, Mitchell Langbert's got to go!" as a security guard calmly diffused the confrontation.

Still, Santos remained unmoved. After the crowds dispersed, he told a clutch of reporters that he doesn't believe Langbert should be fired for saying "something stupid" online.

"It's not like he said it to their [students'] face," Santos said. "Whatever he said, [it] did not lead to any illegal actions on campus. Nobody saw his message and said 'let me go rape somebody today.'"

"He has every right to say whatever he wants on the internet, because that's the country that we live in," he added. "The same way that they can come out and protest what he said."

That sentiment did not prove popular with Santos's fellow students, however. "I've never sexually assaulted a woman in my life, does that make me not a man?" Ruben, a senior majoring in social history who asked that we not use his last name, told Gothamist. "What [Langbert] said was unacceptable and I want to see him go."

Meli Holdipp, a junior double majoring in film and communications, agreed. Especially when you consider his post in light of his professional focus—human resources and management—Holdipp wondered: "How can you trust him to educate us?"

"There's no excuse for it," she said, adding that she hopes the student response will open up a discourse on sexual assault, and make survivors feel more comfortable coming forward.

On Wednesday, Brooklyn College Provost and Senior Vice President for Academic Affairs Anne Lopes issued a statement describing Langbert's post as "offensive, obviously abhorrent, and contravening the fundamental values and practices of our community," but noted that his opinion was protected under the First Amendment. CUNY's Professional Staff Congress also condemned his comments as "disgusting," "misogynistic," "homophobic," and "the antithesis of what colleges—and unions—represent," while in the same breath, stating that it "vigorously opposes calls for [his] immediate dismissal."

Following the protest, President Anderson issued a statement saying she found the "rousing chants" she'd just heard from an impassioned sector of the student body "inspiring."

"I find [Langbert's] words repugnant to our values as an institution of higher education," Anderson wrote. "His remarks contravene our commitments to diversity, equality, and intellectual respect. Students have expressed deep concerns about the faculty member’s statements and position at the college. We take these concerns seriously."

Still, Anderson did not say the College planned to fire or even discipline Langbert; indeed, she did not mention him by name. Directing students toward campus support resources, Anderson instead announced that she would hold a "Speak Out" next week, to be followed by "an interdisciplinary 'Teach-In.'" 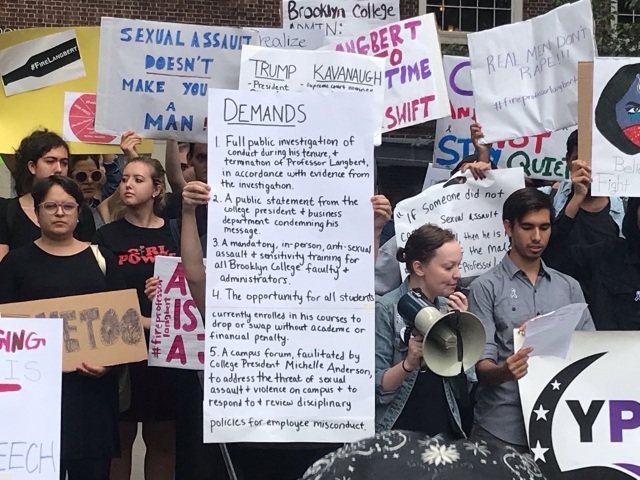 Greene told protesters that they'd given the administration until Monday to take public accountability, and promised that protests would continue until administrators listened to the student body.

"I was super upset with the administration's response, that was a total, big fuck-you to the students," said sophomore Emily Batista. "Especially when we pay tuition here, it was totally inappropriate and that's wrong. They're going to hear from us."

#brooklyn
#brooklyn college
#misogyny
#mitchell langbert
#original
Do you know the scoop? Comment below or Send us a Tip