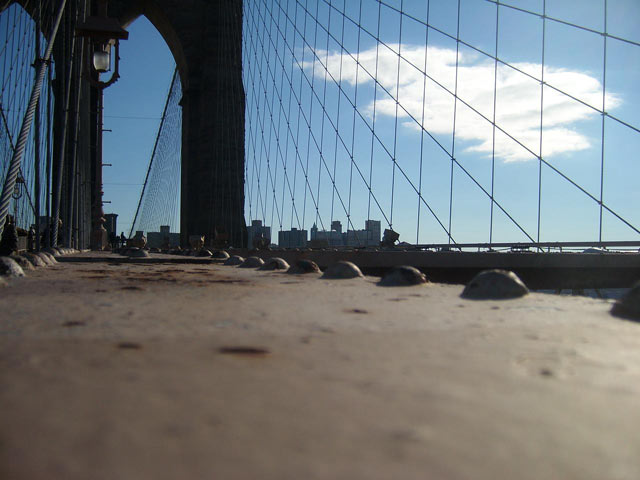 Brooklyn Bridge and cloud, by The life of Boyne at flickr

At 125 years old, it's time for the Brooklyn Bridge to undergo a little fix-up work. The Dept. of Transportation is about to begin a multi-year series of projects to shore up Roebling's bridge structurally, as well as give it a cosmetic touch-up. Popular Mechanics recently named the Brooklyn Bridge one of the top ten pieces of national infrastructure most in need of repair, although those concerns were primarily directed at the on- and off-ramps to the span.

Cracks on the ramps leading to and from the bridge will be repaired between 2009 and 2014 and their supports will be strengthened. The ramp from the eastern side of the bridge to the FDR will also be widened to two lanes to ease traffic. The Bridge's block arches--weakened by salt and water--will be reinforced to make them more earthquake resistant.

A two-year project will also be undertaken to paint the bridge a light beige coffee color, to restore the original appearance of the span. That job will be performed by a pair of barges beginning in the middle of the East River and working towards the Brooklyn and Manhattan shores. Following the collapse of the I-35 bridge in Minneapolis, major spans underwent inspections and the Brooklyn Bridge scored fairly low on a 7-point scale of safety.

Brooklyn Bridge and cloud, by The Life of Boyne at flickr

#barges
#brooklyn bridge
#cracks
#dot
#earthquake
#off-ramps
#on-ramps
#paint
#reinforcing
#steel
Do you know the scoop? Comment below or Send us a Tip