If by "temporarily" you mean, oh, 8 months (Jen Carlson/Gothamist)

Back in August, we noticed that the Squibb Park Pedestrian Bridge, a.k.a the Most Important Pedestrian Bridge Of Our Time (it connects Brooklyn Heights to the Brooklyn Bridge Park), had been closed for a few weeks. Then, on September 8th, we were told the bridge was being monitored but would open the next week. Now it turns out bridge won't be back until the spring.

The bridge has always been bouncy (it's 450 feet long, zig-zagging over Furman Street)—here's what it looked like last year:

But over the summer, it felt creaky, slanted and somewhat terrifying especially with the many people crossing it and the winds off the East River.

On Friday, however, park officials said that Squibb Park Bridge, which cost $5 million, would remain closed until spring as engineers continued to study its movements.

“At this point, because of the movement we notice, it would be overly optimistic to say we could solve this in two to three weeks,” said Regina Myer, president of Brooklyn Bridge Park Corporation, the nonprofit group that oversees development and operations there.

The new bridge, which is designed with trail bridge technology that gives it a little bounce, provides a faster way to access Brooklyn Bridge Park from Squibb Park in Brooklyn Heights.

“We need to fully understand the bridge,” she said, “and we want the public to know that we are really erring on the side of caution.”

... Initially, investigators thought that the bridge’s stability might have been affected by the construction of Pierhouse, a mixed-use development that is rising on an adjacent parcel. But it is unclear if that is the case, they said.

Myer added, "We’re thoroughly committed to the design. We love having this beautiful wooden bridge to access the park." 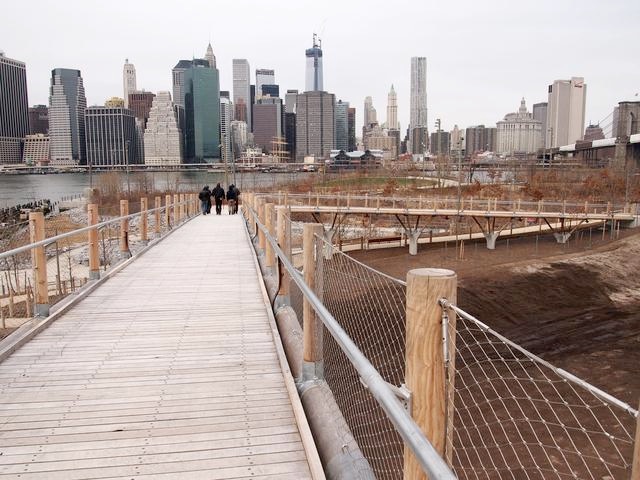 It sure has pretty views, even if it doesn't save you any time from Brooklyn Heights:

Perhaps when the Pierhouse is completed, it'll shield the bridge. On the other hand, it could create a wind tunnel!

#brooklyn bridge park
#pedestrian bridge
#squibb park pedestrian bridge
#wind
Do you know the scoop? Comment below or Send us a Tip
A new Gothamist is coming! We’ve moved comments over to our beta site. Click here to join the conversation and get a preview of our new website.