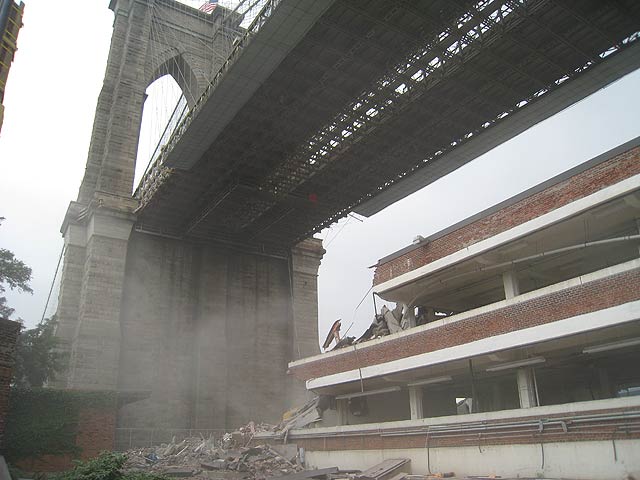 You’ll recall the big stink surrounding the city’s demolition (pictured) of the 1930s-era Art Deco Purchase building by the base of the Brooklyn Bridge in DUMBO – preservationists fought to save it, then the city tore it down to make way for the oft-delayed Brooklyn Bridge Park. The land the building occupied was supposed to be turned into a beautiful Euro-style piazza and skating rink by fall 2009, according to estimates by the Brooklyn Bridge Park Conservancy. Unsurprisingly, that’s not going to happen for at least five years because the DOT, which still owns the property, needs it to do repairs on the bridge. City Councilman David Yassky, whose district includes the park, tells the Post:

We all know how the bureaucracy works – a few years will become five years, and then 10 years, and then you can kiss that section of the park goodbye. This land was promised for parkland, and it should stay that way. Surely DOT can store its equipment somewhere else nearby.

A DOT spokesman says it’s not just about storage, but sandblasting and painting, and “the public should be nowhere near the area during this time.” The Conservancy still expects parts of the 1.3-mile waterfront park to be completed by the end of next year, but the Brooklyn Paper notes that the project, which includes luxury condos to subsidize park maintenance, has thus far amounted to a string of hollow promises; projected costs have doubled to $300 million (of which only $225 million has been set aside). “People’s expectations and hopes have been toyed with,”says Ken Baer, a Sierra Club official.