The new Pierhouse development located at Brooklyn Bridge Park's Pier 1 will include luxury condos, a hotel, and a rooftop bar. It will not include affordable housing. It sits behind the park lawns, but in front of Brooklyn Heights, blocking views from certain public areas (and private homes). This has caused a debate in the neighborhood that echoes the outcry of Robert Moses trying to cram the BQE through it, so we've asked for op-eds from both sides. This note is from Regina Myer, President of the Brooklyn Bridge Park Corporation, which supports the condo's construction. 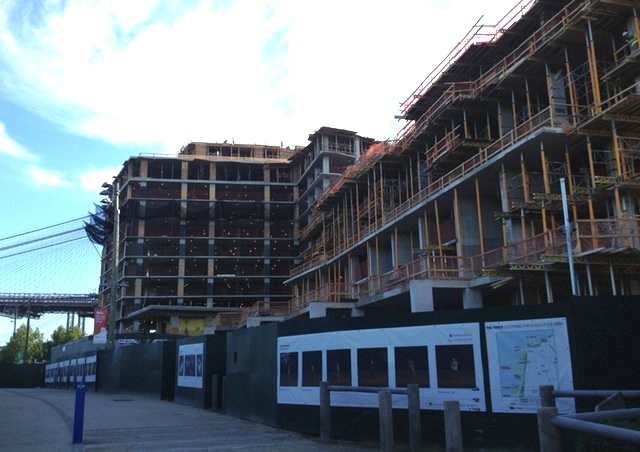 Lately, there’s been a lot of talk about the views from the Brooklyn Heights Promenade and from the area just to the north known as the Fruit Street Sitting Area. Many of the claims we've seen are inaccurate and have led to a great deal of misunderstanding and vitriol.

When a situation gets this heated, it’s important to keep the facts in mind.

First, consider the very existence of Brooklyn Bridge Park and its funding structure. When you stand on the Promenade or at the Fruit Street area and take in the sweep of the park, remember what that view was just a few years ago: dilapidated warehouses and crumbling piers that the Port Authority of New York and New Jersey wanted to sell to private developers. In 2002, funds to build the park were provided by the city and the state with a mandate that the site itself would generate the revenue to maintain the park in perpetuity. That funding is provided by development on sites at the edges of the park project. In recent weeks, one of these revenue-producing sites has been in the spotlight: Pierhouse, a hotel and condominium under construction adjacent to Pier 1 that has been permitted since 2005.

The view from the Promenade (at Pineapple Street) before 2010

Remember what used to exist on that same Pier 1 site until 2010: a large, squat, crumbling complex of buildings called the National Cold Storage Warehouses. If it weren’t for the park and Pier 1 development, those disused buildings would be standing today.

It’s also important to understand that in no way does Pierhouse obstruct any protected scenic views. Compliance with the Brooklyn Heights "Special Scenic View District,” which protects a clearly defined view plane from the Promenade towards Governors Island, the Harbor, Lower Manhattan and a western section of the Brooklyn Bridge, has always been a requirement of the project, and a commitment we take very seriously. Incidentally, the Cold Storage buildings did violate the view plane, but were grandfathered in when the view was officially protected in 1974.

While it is understandable that many do not recall the visual impact of the old warehouses, the view from the Fruit Street Sitting Area was never protected. It was always known that development on our site would obstruct that view—much as the old warehouses did.

The current view from the Promenade (at Pineapple Street)

Far from a sudden surprise, as some have recently depicted, the building under construction today is the same that was presented to the community in 2013. Through a series of public meetings dating back to 2011, Pierhouse underwent a transparent design review process. Our Community Advisory Council—the body through which the park consults with the community—was updated on all design changes, including modifications following Hurricane Sandy.

About those modifications: after the storm, FEMA’s 100-year floodplain elevations were updated and the New York City zoning code was amended. Pierhouse designers responded by raising the base of the building 3.55 feet, out of the flood zone. Mechanical systems were moved out of the basement and, together with additional backup equipment to increase resiliency, were placed on the roof.

Again, that was not a surprise. From the earliest community meetings on Pierhouse, we made it clear that mechanical equipment—known as “permitted obstructions” in NYC zoning parlance—would be placed on the roof of the 100-foot building. That equipment now comprises 15 percent of the building’s roof. We even created a special model depicting post-Sandy modifications just for our Community Advisory Council.

Next time you're on the Promenade enjoying the incredible, and protected, view, take a look at Brooklyn Bridge Park below. Think about how it came to be and how far it has come in just a few years. By spring, two-thirds of the project will be complete. Finally, remember that without revenue from developments like Pierhouse, the park, which is already enjoyed by millions from across the city and beyond, simply would not exist.

Now, with those millions of parkgoers in mind, the job ahead of us is clear: finish the park according to plan and preserve it for generations to come.

#brooklyn bridge park
#condo
#op ed
#pierhouse
#view
#original
Do you know the scoop? Comment below or Send us a Tip