Brooklyn Borough President Wants You To Adopt These Shelter Dogs

It's National Adopt a Shelter Dog Month (Happy National Adopt a Shelter Dog Month!) and this afternoon Brooklyn Borough President Eric Adams was joined by some dogs at a podium outside of Borough Hall to announce "an effort to advance adoption of shelter pets in the borough and across the city [and] unveil a legislative push to incentivize New Yorkers to adopt pets from animal shelters or humane societies."

Why? There have been efforts over the years to ban pets from pet stores in NYC, as those animals typically come from puppy mills. Earlier this year, there was a move "to amend the administrative code of the city of New York, in relation to prohibiting the sale of puppies and kittens bred in puppy and kitten mills." Still, there are pet stores in NYC that sell animals from these mills.

BP Adams (who was joined today by some of the borough's biggest shelter dog supporters: Brooklyn Bark and Sean Casey Animal Rescue, to name a few) was also on hand to promote his Adopt-A-Pet Day. That will take place this Saturday at Brooklyn Borough Hall Plaza, where there will be shelter pets available for adoption from 11 a.m. to 3 p.m.

The first rule of dog pressers, however, was blatantly disregarded: a kitten was in attendance (albeit, a kitten who is a huge supporter of shelter dogs). 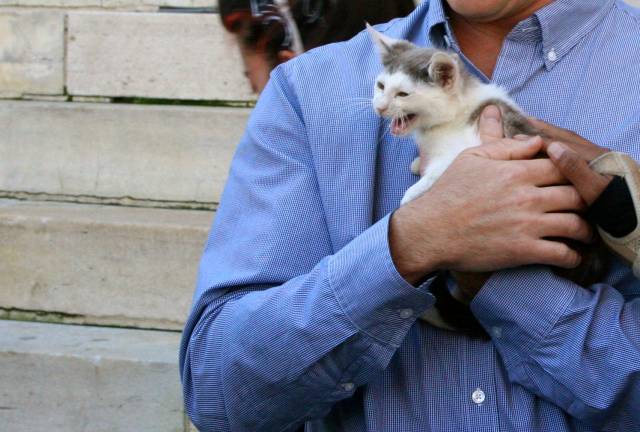