P.S. Bookshop, an independent used and out-of-print bookstore in DUMBO that specializes in architecture and photography, is likely to close by the end of the month after a year-long struggle to pay off its real estate taxes.

Founder Yuval Gans, who lives in nearby Downtown Brooklyn with his wife and two kids, says he learned in 2014 that he owed his landlord, Two Trees, about $32,000 in real estate taxes stretching back four years. By spring 2015, the number had ballooned to nearly $40,000.

Gans launched a crowdsourcing campaign in the hopes of staying afloat, but the July 1st tax deadline came and went. He ended up using the $13,600 in crowdsourcing money to acquire a lawyer. Gans says he's payed off the $50,000 owed through the end of 2015, plus $6,000 in legal fees, out of his "own private resources." But 2016 taxes are already upon him, and he's fallen behind on rent, too, since January.

"This doomed fight left me utterly depleted—financially, emotionally and physically," Gans told us on Monday. "Part of me is still waiting for a miracle, but at this point I don't know what that would entail."

Gans first opened P.S. near the corner of Front and Jay streets in DUMBO in 2006, and moved to the larger space at 76 Front Street in 2010. He has watched the neighborhood transform around him over the last decade, with the arrival of big-box retailers—from BoConcept, to Brooklyn Industries, to West Elm. Meanwhile, commercial real estate taxes are increasing annually. "Commercial tax has been doubling with every passing year, [and] in the last year alone it exceeded, for me, the amount of two months' rent," he told us last spring.

Both Gans and Two Trees declined to confirm Gans's rent, although Two Trees said that the lease runs through 2020, and is below market-rate.

P.S. Bookshop received notice last July that Gans had three weeks to make payments. His lawyer tried to negotiate a way for him to stay, but Gans says that a deal with Two Trees couldn't be reached. 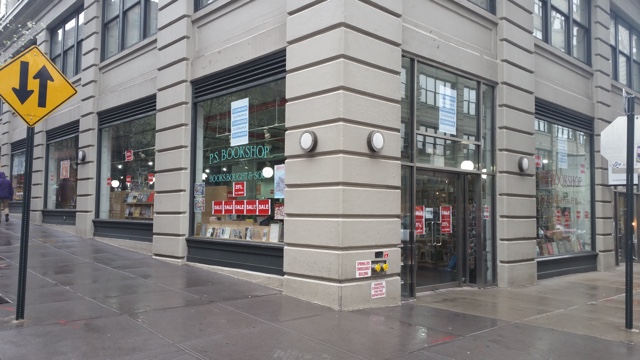 Since March, all of the inventory at P.S. has been steeply discounted—50% off all children's books, and 25% off the other volumes. Gans has crates of art catalogues from $10 an issue, and a limited edition eleven-volume set of Audubon American Wildlife books. One rare 19th-century illustrated flap book about midwifery is on sale for $1,250. Nearby Absolute Piano loaned one of its wares to P.S. a few months ago, and Gans, who's classically trained, says playing it has been a comfort.

"I play [the piano] every day and it makes me less sad," he told us. People come in and play off of the street, too—lot's of Adele.

As for what's next, Gans says he hasn't thought that far ahead. "I have a family and responsibilities, but the hard thing for me right now is giving up this thing which is inseparable from my ego and my identity," he told us on Tuesday. "I've been selling used and out-of-print books for the last 16 years."

Reached for comment, a spokesperson for Two Trees stressed that The Powerhouse Arena, another bookstore in the neighborhood is still thriving.

"Two Trees has always been committed to small, local retail and we enabled PS Bookshop to stay in DUMBO for many years at rents far below market rate," said the spokesperson in a statement. "Unfortunately, they were still unable to make ends meet, so we look forward to bringing another great retailer to DUMBO that is consistent with the neighborhood feeling and will serve our commercial and residential tenants."

Gans said on Monday that the whole feeling of the neighborhood is changing. "All of the small businesses are losing their ground," he said. "We're angry, because we were a central part of this [DUMBO] hype... now it's completely in the hands of the developers."

Gans is hosting free piano concerts in his Front Street shop while he's still around. Pianist Jed Distler is performing Thelonious Monk this Friday at 7:00, and there's a children's recital on Saturday at 10:00 a.m.

#dumbo
#p.s. bookshop
#two trees
#original
Do you know the scoop? Comment below or Send us a Tip