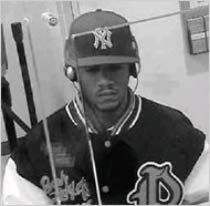 Success made Orlando Taylor greedy - and an jailed man for robbing two Brooklyn banks a total of four times in just three days. He was arrested when spotted outside one of the two banks, apparently casing it out for another robbery.

The first robbery occurred on Friday morning at the HSBC bank at 342 Fulton Street, taking $450 dollars. Taylor then robbed a Bank of America branch at 350 Fulton Street on Saturday morning, following the same formula as his earlier robbery: Passing a threatening note to a teller. He managed to take almost $3,500. Then, on Monday, Taylor robbed the same Bank of America branch at 10AM and then again a few hours later! He managed to take about $3,800 in total. Again, he passed a note to demand the cash.

Yesterday, undercover police were both bank branches, and Taylor was seen outside the HSBC branch. The police were able to ID Taylor partially because of surveillance photographs from the banks. He was arrested after being found with, yes, a threatening note for a bank teller in his pocket.

Criminal justice professor at Northeastern University Peter K. Manning professor told the NY Times, “This is amazing. Most property crime is compulsive crime, but this is a little extreme." Taylor faces multiple robbery charges. And WNBC notes that "bank robberies citywide were down 3 percent, to 266 from 274, compared with the same period last year."