Since Zuccotti Park was raided and cleared last November, a seemingly arbitrary set of rules enforced by Brookfield Properties and the NYPD have made entering and enjoying the public park akin to being subjected to a TSA screening. This document, allegedly distributed by Brookfield to the phalanx of security guards it employs to mind the park, specifically identifies those rules and acknowledges the "fluid situation" that exists in balancing the rights of park patrons with the interests of a multibillion dollar corporation, and seemingly suggests that security personnel "remind" any "resistant" police officers that their Chief of Department is expecting their cooperation.

The alleged memo instructs the "tour supervisor" to "identify and make introduction to the highest ranking member of the NYPD" stationed at the park. Here is the passage that suggests that security employees "remind" NYPD officers of their duty to obey the highest-ranking uniformed officer in their department:

NYPD supervisors that prove to be resistant to enforcing the rules of the park should be reminded that Chief Esposito has agreed to this set of rules and wanted them to be enforced with zero tolerance.

In this video, Chief Esposito can be seen shoving Occupy Wall Street protesters onto the sidewalk during a demonstration in Lower Manhattan.

The rules stated in the alleged memo (which aren't much of a surprise to anyone who has visited the park since the raid) go beyond the set of regulations upheld by a Manhattan Supreme Court Justice last fall and stipulate that patron may only bring "ONE BLANKET…(or "Snuggie")" into the park, and that "the establishment of a "Library," "Kitchen," etc, is prohibited." Musical instruments, except drums, are permitted, and if they are in a carrying case "the case must be open and visual inspection to confirm it is an instrument (rules regarding instruments are in flux)."

According to a livestreamer who witnessed NYPD personnel reading the document, the paper was allegedly given in error to a patron of the park by a Brookfield employee. We've reached out to Brookfield and the NYPD for comment, and will update when we receive any additional information. The entire document is below.

[UPDATE] Matthew Cherry, a representative for Brookfield Properties, says the company has "no comment at this time." The NYPD has yet to respond for our request for comment. 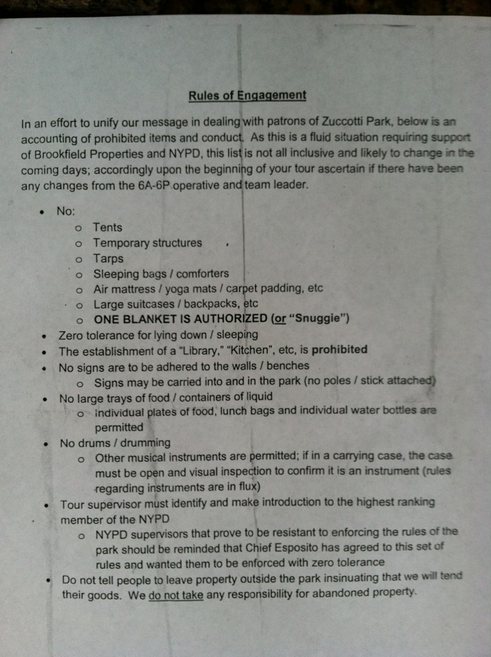