Brooke Astor's Will & Testament, And She's Not Even Dead 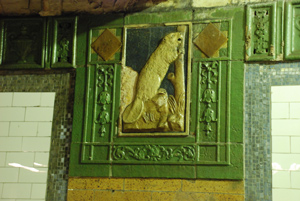 In an interesting yet somewhat crass article, The New York Times jumps the gun on 105-year-old Brooke Astor's impending death and pores over her last will and testament, examining the document to see who is getting what. It is almost fortunate that Astor's sufferering from reduced mental competency at this point, because we imagine the doyenne of New York's philanthropic scene might be embarrassed at her final personal requests and bequests being publicized in the pages of the Times.

The will, which Mrs. Astor signed on Jan. 30, 2002, reflects her love of New York City, her own particular brand of charity and even her devotion to people and her joie de vivre. It specifies, for example, that she be buried next to her late husband and that the words on her gravestone declare, “I had a wonderful life.”

Mrs. Astor's will includes directions about who gets certain personal possessions (e.g., friend David Rockefeller gets the stone Buddha head statue in the library of her apartment, another friend Annette de la Renta gets the four dog paintings from the staircase at Astor's Westchester mansion.) Most of Mrs. Astor's wealth is being given to NYC institutions she has supported throughout her life, like the Metropolitan Museum and the New York Public Library. A large sum is also being tranferred to her son, Anthony Marshall.

Marshall was accused by his own son of mistreating Mrs. Astor last year. Recent changes to her will that benefitted Anthony Marshall were found to have included a forged signature. The changes, or codicils, are under seal at a Westchester County court, but an interested party passed on copies of the documents to The New York Times, which is how we happen to be reading Mrs. Astor's last will and testament in Sunday's paper.

Brooke Astor's third husband was Vincent Astor, the only son of John Jacob Astor IV, who died in the sinking of the Titanic. A quote from one of Mrs. Astor's biographies: ""He had a dreadful childhood, and as a result, had moments of deep melancholy," Astor recalled. "But I think I made him happy. That's what I set out to do. I'd literally dance with the dogs, sing and play the piano, and I would make him laugh, something no one had ever done before. Because of his money, Vincent was very suspicious of people. That's what I tried to cure him of."